12 prominent Nigerians who died in July 2020 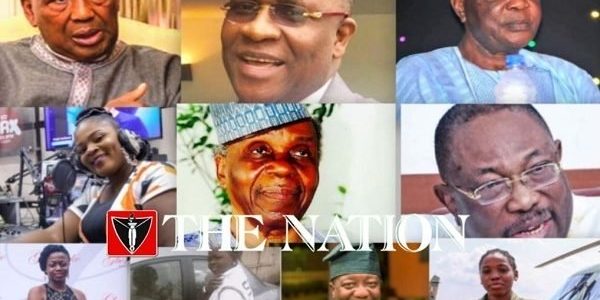 July 2020 has been tough for Nigeria. Many of its prominent citizens have died in the month, throwing the nation into mourning.

Here is a list of prominent Nigerians who died in July, 2020:

The former President of Newspapers Proprietors Association of Nigeria (NPAN) Mallam Ismaila Isa Funtua died after driving himself to a hospital.

Funtua, born in Funtua in January 1942, was a Second Republic Minister of Water Resources in the late President Shehu Shagari administration and a member of the Constitutional Conference convoked by the late military dictator Gen. Sani Abacha.

Until his death, Funtua was one of the most influential politicians and businessmen in the country. He died on July 20.

In the early 1980s, he established The Democrat, an all-colour newspaper in Kaduna which became authoritative on political matters. His construction firm, Bulet, became a household after constructing the magnificent Office of the Head of the Civil Service of the Federation.

He was a life patron of the NPAN and also a patron of the International Press Institute (IPI). He attended the Commercial College in Zaria, Federal Training Centre in Kaduna, the Ahmadu Bello University in Zaria, the University of Manchester, and was the Monitor-General of Course 9 of the Senior Executive Course at the National Institute of Policy and Strategic Studies.

Arotile’s young career was halted on July 14, a Tuesday, when, according to the NAF, she was “inadvertently hit by the reversing vehicle of an excited former Air Force secondary school classmate while trying to greet her” in Kaduna.

Born in 1995, she was admitted into the Nigerian Defence Academy on September 22, 2012 and commissioned five years later.

She made history in October 2019 when she was winged as Nigeria’s first female combat helicopter pilot in the Air Force’s 55 years of existence.

An official release by the Nigerian Air Force says as of October 2019, Tolulope had acquired 460 hours (about 19 days) of flight within 14 months in flying a helicopter.

The Chairman, Committee on Information and Strategy of the Lagos Assembly, Tunde Buraimoh, died on July 10.

The late Buraimoh, who represented Kosofe Counstituency 2, was an active and eloquent member of the House.

Some of the lawmakers described Buraimoh’s death as a rude shock.

The late Aminu Adisa Logun was the Chief of Staff to Kwara Governor Abdulrahman Abdulrazaq.

A statement by the Chief Press Secretary to the Governor, Rafiu Ajakaye, said Logun died of COVID-19 complications, only few hours after result of test carried out on him returned positive.

He was described as an industrialist, a public intellectual and an elder statesman.

She was an On-Air Personality (OAP) with Rhythm 93.7 FM before she took ill.

It was gathered the ailment took a big toll, keeping her hospitalised and away from work.

According to the management of TVC Communications, owners of TVC, TVC News and Max FM Lagos and Abuja, Iya Jogbo died after a brief illness from bronchitis and an enlarged heart.

She was popular with the Wetin Dey show on Max FM.

The First Republic minister and ambassador to Ivory Coast, Alhaji AbdulGaniyu Folorunsho Abdul-Razaq, was the first lawyer from Northern Nigeria and father of Governor AbdulRahman AbdulRazaq of Kwara State.

The remains of the elder statesman were interred at his Idi-Igba family house in Ilorin, Kwara State capital, in accordance with Islamic traditions.

He was a popular Yoruba actor and singer.

Yusuf’s death was announced on Instagram by his popular colleague, Adekunle Afod.

The late Dr. Michael Adeyeri was a former chairman of the Ondo State chapter of the Nigeria Medical Association (NMA).

He reportedly died of COVID-19 complications.

The late Jide Odekunle was a former General Manager of the Lagos State Infrastructure Maintenance and Regulatory Agency (LASIMRA).

He died on July 29 after complicated diabetic issues at 77.