140 children kidnapped by gunmen in latest school raid in Nigeria 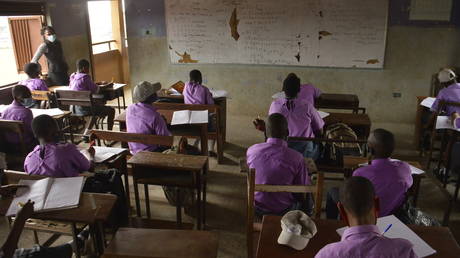 Armed assailants have abducted 140 children from a boarding school in northwest Nigeria. The mass kidnapping is the latest such incident in the country, with hundreds still missing from raids carried out in the past six months.

The pupils were kidnapped from Bethel Baptist High School in Kaduna in a raid late on Sunday night and into the early hours of Monday morning. A teacher at the school, Emmanuel Paul, told the AFP news agency that “the kidnappers took away 140 students – only 25 students escaped. We still have no idea where the students were taken.”

A search for the missing children is underway. Local police spokesman Muhammad Jalige said that “officers involved in the operation are charged to ensure no stone is left unturned” in their efforts to rescue the youngsters.

Monday’s school abduction is part of a larger problem that has plagued the region for the past decade – and one that has forced payouts from desperate families seeking the safe return of their loved one. From June 2011 to March 2020, it was estimated by SB Morgen Intelligence, a Nigerian research and consulting firm, that at least $18.34 million dollars had been paid to kidnappers for ransom.

Armed gangs also kidnapped at least eight people, including two nurses and a one-year-old baby, from a tuberculosis hospital in the same region early on Sunday morning.

Since December 2020, nearly 1,000 children have been abducted from their schools by gunmen, hundreds of whom are still missing. Last month, 80 students and five teachers were abducted in a similar attack on a school in the northwestern state of Kebbi.

One of the most prolific school raids carried out on Nigerian soil was executed by the terrorist group Boko Haram in 2014, when almost 300 Christian students, mostly girls, were abducted from Chibok.