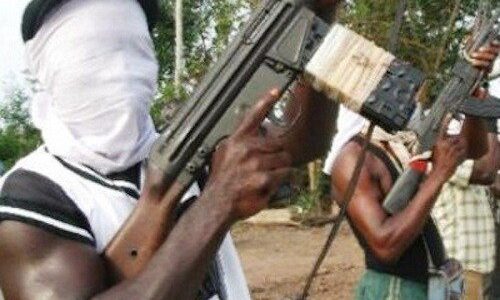 Two persons, a policeman and one of the suspected hoodlums that attacked a Police checkpoint along the G-Hostel Junction axis of the ever-busy Enugu-Abakaliki Expressway in Ebonyi State, were feared killed on Wednesday afternoon, after an attack on Policemen.

The incident, LEADERSHIP gathered, was said to have happened at the junction near the popular Presco junction in Abakaliki, the State capital.

“I went for a programme and I just came back to the office now. The rumours of the attack is on the social media but I can’t give details now. I have called the DPO of the area and I am still waiting for him to give us details.

“People are saying that one policeman was shot dead but I can’t confirm that for now. There is also another rumour that one of the gunmen was arrested but all the information are still rumour. The details will come when we get comprehensive report from the DPO,” the PPRO said.

LEADERSHIP gathered that the gunmen who were three in number operated in a motorcycle.

The hoodlums reportedly opened fire on the Policemen at the checkpoint, killing one of them instantly.

In the gun duel that ensued, the policemen were said to have shot dead one of the attackers just as the other two escaped on the motorcycle.