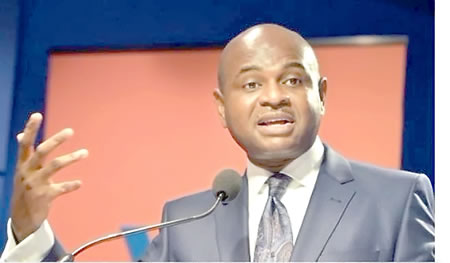 A former Deputy Governor of the Central Bank of Nigeria and ex-presidential candidate, Kingsley Moghalu, has faulted the alleged move by senators to bar the Independent National Electoral Commission from making use of electronic transmission of results in the 2023 general elections.

This is as the Senate is set to receive and debate the provisions of the Electoral Act Amendment Bill on Tuesday.

The PUNCH reported that one principal officer from the northern part of the country who spoke on condition of anonymity had said there will be gross injustice if INEC is allowed to transmit results electronically.

According to him, most parts of the north are not enjoying efficient network service from telecommunications companies.

He cited areas in the North-East where Boko Haram insurgents had destroyed the masts of the service providers.

However, Moghalu, while reacting on social media, said if a law is passed against the use of electronic transmission of results, it would be “a fraud and rape on democracy.”

He tweeted, “Reports that @nassnigeria intend to remove, on the basis of flimsy technical excuses, the provision for electronic transmission of results from the new electoral law Nigerians have been waiting for, are deeply disturbing. If they pass such a law, it’s a FRAUD & RAPE on democracy

“It is becoming clear that our political elite are themselves enemies of democracy because many of them benefit from rigging of elections. It is a shame legislators from BOTH @OfficialAPCNg and @OfficialPDPNig would collaborate to pass such a law. That tells us all we need to know.”

0 comments on “2023: Moghalu faults move against electronic transmission of results”