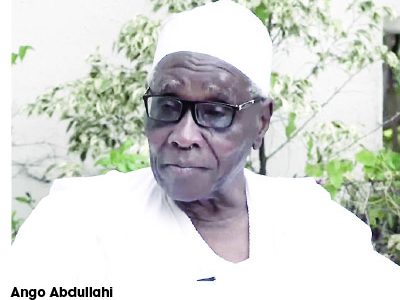 Professor Ango Abdullahi, a former minister and Vice-Chancellor of the Ahmadu Bello University (ABU) Zaria and currently Chairman of the Northern Elders Forum in this interview took a look at the President Muhammadu Buhari five-year government and concluded that it has failed to meet the yearnings of Nigerians. He also asked Nigerians to forget about rotational presidency among other national issues.

Nigerians recently celebrated Democracy Day on June 12. What is your reaction to the celebration?

(Cuts in) The only Democracy Day, for me, will remain 1st of October, our Independence Day. I have looked at all the elements that have gone into the sentiments of creating Democracy Day whether it is 29th of May or June 12. I see no justification for the sentiments expressed by those who really created the names or days because the days were not created by Nigerians. The days were created by political leaders looking for greater foothold in the polity, wanting to have a little more space in the political history of Nigeria.

Who are those celebrating? Let them celebrate.

(Cuts in) You see I have always said that the biggest criminals against democracy in Nigeria are journalists.

Because you are not helping democracy in Nigeria, but in other parts of the world, it is journalists that are helping to develop democracy. You are singing your master’s voice all the time and not the people’s voice. That’s all. If you ask me to differentiate between the current administration and the past presidents…well, I worked with only one president, Obasanjo and I will state clearly that Obasanjo was by far a better president than Buhari. That is my position.

Some political analysts have walked on the same path you are walking now because their conclusion is that in all indices of governance, this government has failed and they also talked about the hues and cries everywhere…

Prof. if you just allow me to conclude my question, you probably may see my line of thought. It’s not true that journalists are supporting government although where there is the need why not? But what I meant was that the government is celebrating its five years in office. Now…

(Cuts in) Aha! Then say you are celebrating because I thought you said you are celebrating. Then say the government is celebrating five years in office or is observing or whatever it is; then it is government. The question that would follow would then be would people join in this celebration? Then the people you sample will tell you their feelings just like I told you that there is nothing to celebrate.

Prof. I told you the reaction of some people who feel that the masquerade can no longer dance because those beating the drum, including those who thought that the package of change that the APC sold to Nigerians are laced with gold are beating their…

(Cuts in) In fact, they cannot beat the drums anymore because they are hungry. Well, I will be 82 sometimes this year and I still want to celebrate my well being as a student, as a worker starting from 1960 when I went to the university in Ibadan and up to the time I came to start work in Zaria, the two governments that I have enjoyed and I believe Nigerians enjoyed are the first republic government, their leadership style, their sacrifices, their honesty and so on and the government that followed even though it was a military administration. The Gowon government is the best military government this country has ever had if you are talking of military administration. So, well, you have to write something anyway so that you can sell your papers.

Prof, what do you think of the five years of the Buhari government?

You know I have been insulted and abused when I came out before the 2019 election to say that Buhari should not be elected because he has failed in his first four years of his administration. I have granted your paper interview several times and my conclusion was that Buhari was a failure. That was why we elders, Afenifere, Ohaneze and so on said that Atiku should be elected. We said so. It was in the open. So for us to say that Atiku should be elected, it means that Buhari has failed in our view and we didn’t hide it. You tell me what has changed since he came again. Since after the 2019 election we have had more problems; killing of people all over the place, hunger is everywhere. So, you Nigerians, that is your ‘wahala now’. The problem with Nigerians is that they don’t seem to learn anything from history. So, when perhaps in another one year or two the politics begin, you see them dancing around the same people who have failed them, who have stalled this journey of 60 years. So, what can you do? For me now at this stage, it is ‘sidon look’ .

You have painted a gloomy picture of Buhari’s government and rather unfortunately, some Northerners are insisting that the presidency should reside in the North in 2023. Would it be morally justifiable for the North to come again after Buhari?

Who will be in power in 2023? Buhari would have run his tenure of eight years so you don’t expect him to say that he is coming again.

In that case, are you also saying it is the turn of the North in 2023?

No, no, no; there is no such thing as turn because this thing now has to die. The question of my turn today, your turn tomorrow must die. What should be alive is: where is a good Nigerian who will run this country efficiently and effectively? All this bojuboju must stop. I was in PDP. I was one of the people who formed PDP and we inscribed this rotation, but we saw that it was wrong and is still wrong. So, I think that Nigerians of future generation should forget it and begin to search for people who will run the country more efficiently and effectively, whether from north or south; even if it is gotten from the sky, but I am sure we have plenty of them in the country.

As you are aware, the Senate has set up a Constitution Review Committee led by the Deputy Senate President, Ovie Omo-Agege and they would want inputs from stakeholders like you on some of the…

(Cuts in) My view is that the country should return to parliamentary system of government. That is my position. The presidential system has failed. We didn’t give the parliamentary system a chance. We practised it for only five years and now we have tried the presidential system for 20 odd years and we are getting into worse situations and so on and we are getting into problems politically, economically, socially and so on because we have chosen a system that doesn’t fit a poor country like Nigeria and a diverse country like Nigeria. So, parliamentary system of government is the solution in terms of government. Now, we are talking about system, a system where we can have accountability, discipline, law and order, your courts are functioning; parliamentary system is it. It is better than the current presidential system that we are running. The National Assembly is not thinking the same with 99 percent of Nigerians. They are very comfortable but 99 percent of Nigerians are not comfortable. They are not on the same page with Nigerians.

Having spent about N7 to N8 million on the National Conference of 2014 with about 600 resolutions at the period, is it not important to just look at the resolutions in order to bring out the important provisions that were debated and agreed on instead of spending money and time on another get together that…

(Cuts in) It was all self serving. I argued against it. I argued against even my seniors like Nwabueze because we saw what was behind it. We were consulted and we said we were not participating because it was not a representative conference. It was a selective conference to serve an agenda and that is why we refused to attend and participate and we will continue to refuse to accept its recommendations.

What would you say about the management of COVID-19?

I think the Almighty has been very kind to us because if you see what this virus has done in developed countries like America, UK, France, Italy, you must kneel down and pray for God’s mercies because we are totally ill-prepared, unprepared, disorganized in terms of dealing with this kind of emergency. The only thing we are able to do now is just to count. Even the counting is not correct. I am sure it is not correct. There are so many people who have died without being accounted for. We hardly have a functioning health service in this country. You go to any Teaching Hospital today and ask how many dialysis machines do they have for people with kidney problems? Go to all these places; there are no services. But you can imagine what is happening in countries like UK where the services are there, National Health Institute; but all the same, you can see the bashings they are having from this virus. So, we thank God for His mercies for sparing Africa or Nigeria for being low in the counting but whether we are counting accurately is the question I raised a few minutes ago. We are in trouble. You know this virus is not gone and the experts around the world are saying the virus is still up there. What they are battling now is to see whether a vaccine can be developed or therapy for people afflicted by the disease in hospitals. None of them is available even in the developed countries, let alone here.