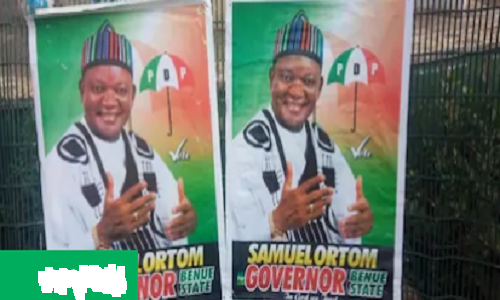 Ortom for Senate 2023 posters have flooded the streets of Makurdi, the State capital.

The posters, powered by a group, Diversity Managers Club, were seen at the major roundabouts in Makurdi, including Wurukum roundabout, High Level Roundabout and other areas of Makurdi town.

The group stated they decided to single Governor Ortom out because of his stance on ranching, which led to enactment of the anti-open grazing law in the state.

Some inscriptions on the posters read: “The Open Grazing Prohibition and Ranches Establishment Law is an element of diversity Management”; “We support Ortom for Senate 2023,” “The national security projec,” and “Taking the anti-open grazing law to the Senate” among others.

Chief Press Secretary to Governor Ortom, Mr. Terver Akase, said since it was the wish of the people, there was no way his principal could stop them.

He however said even though his boss appreciates such calls, he would rather concentrate on giving his best to the state for the remaining two years of his tenure.

“It is the people’s wish so the Governor won’t stop them. He finds such outings as well wishes.

“Governor Ortom has a mandate to govern Benue in the remaining two years and at the moment, that’s where his focus is,” Akase said.