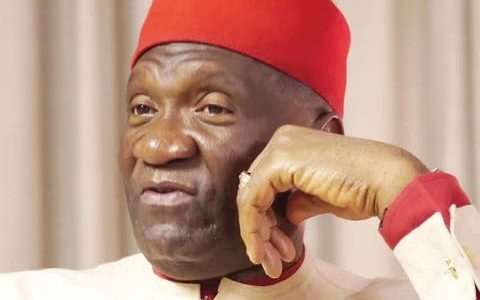 Some remarkable milestones were recently recorded in the clamour for a person of South East origin to succeed President Muhammadu Buhari in 2023. The aftermath of the destruction and carnage witnessed in the region in the wake of the just concluded national protest by the youth against police brutality tagged #EndSARS posed urgent need to engage the youth.

So, the South East Governors with Ministers and other leaders met with the Igbo youth and the Movement for the Actualisation of the Sovereign State of Biafra (MASSOB), at the Enugu State Government House, to proffer lasting solution to restiveness and violence in the geopolitical zone.

Arising from the meeting on October 30, the youth demanded that the zone be given the opportunity to be president of Nigeria in 2023.

They also demanded for creation of one more state in the South East for the region to be like others.

The communiqué signed by the youth leaders and MASSOB leader, Uchenna Madu, stated that “The South East should be given the opportunity to be President of Nigeria in 2023.”

It further decried what they called serious discrimination and marginalisation of South East federal civil servants and urged the Federal Government to redress the ugly trend.

“The Igbo youths and MASSOB note with sadness, that Igbo land is being discriminated against in the allocation of federal infrastructural projects. We note specifically, that all the federal roads in Igbo land are in a terrible state of disrepair. We therefore demand that the Federal Government should immediately approve a substantial intervention fund to complete these road projects.

“We also demand that substantial allocation be made for major infrastructural projects in the 2021 budget currently before the NASS.

“That the President General of Ohanaeze Ndigbo should lead a delegation of South East youth representatives and selected Igbo leaders to the presidency, to make their demand known to Mr President,” the communiqué stated.

Prior to the enlarged meeting; some youth leaders had in another virtual interaction with the Governors made other demands to the Federal Government.

Their demands include dredging of River Niger, completion of remaining works at the Akanu Ibiam International Airport and making it truly international.

Chairman, South East Governors’ Forum (SEGF) and Governor of Ebonyi State, Chief David Umahi, said that stakeholders from the zone met with the youths who expressed happiness with ongoing work at the Second Niger Bridge but noted that it should be expedited.

They further demanded that someone from South East should be considered to become IGP after the incumbent.

Umahi said: “I promised them to take their demands to the President. The youths are requesting that the Federal Government should complete the dredging of the River Niger.

“The youths of the South East are grateful to the Federal Government for the upgrading of facilities at the Akanu Ibiam International Airport, Enugu. The youths are demanding that the remaining works at the airport should be expeditiously completed as matter of urgency.

“The youths are grateful to the Federal Government on the progress of work at the 2nd Niger Bridge.

“They, however, demand an update on the work and specific completion timeline. The youths also tasked the governors of South East to engage critical stakeholders in the ongoing protests in their respective states and local security architecture.

“These are the demands of the youths and I think these youths are very reasonable in the demands and what they brought to the table is that all protests, all divisive words, all destructive tendencies will be stopped immediately.”

“I promised them that I am going to take these demands to Mr. President and I believe that they are going to reciprocate from now and cessation of hostilities in every part of South East and anywhere they are involved in the country will cease. We have directed our people everywhere in the country and outside the country to stop protests”.

Actually, there has been frustration and despondency in the South East following long years of marginalisation including the perceived exclusion of the zone in key government appointments such as the security architecture since 2015 by the Buhari administration.

People of the South East had originally resolved that restructuring of Nigeria was the only antidote to the multitude of problems plaguing the nation. This, they captured in the communiqué of their summit held at Ekwueme Square, Awka, Anambra State in May, 2018.

Interestingly, while they pursued restructuring in collaboration with the Afenifere, Middle Belt Forum and the Pan Niger Delta Forum, the push for an Igbo President of Nigeria in 2023 has continued to gain currency and become more strident.

Numerous campaign groups have sprung up while the apex Igbo organisation, Ohanaeze Ndigbo has been mandated to coordinate the project. Igbo leaders had risen from a crucial meeting early this year, with a resolve to pursue both restructuring of Nigeria and emergence of Nigerian President of Igbo extraction as both were not mutually exclusive.

They also asked other ethnic nationalities and zones, to as a matter of justice, equity and fairness support the emergence of a Nigerian President of Igbo extraction in 2023.

The summit noted that the Igbo as one of the tripod of the country have not produced a President and hence identified the urgent need to resume the outreach programme to other ethnic nationalities and zones of the country with a view to achieving support for the Nigerian President of Igbo extraction and restructuring of Nigeria.

Therefore, they mandated the leadership of Ohanaeze to constitute a high-powered lobby group for the project.

Part of the communiqué signed by Prof. George Obiozor, National Coordinator, and Dr. Ifedi Okwenna, Director General of the summit group, read: “The leadership of all political parties should as a matter of justice, equity and fairness, cede the nomination of their Presidential candidates to the South East.

“That the President-General should in consultation with Ime-obi, constitute a Pan-Igbo Organizing Committee to develop and pursue a sustainable strategic plan of action for the “handshake outreach” across Nigeria.”

Other groups such as the Conference of Ndigbo Worldwide (CNW), South East for Presidency 2023 (SEFORP2023) and 2023 Presidential Mandate Group, have also asked the major political parties to cede their respective presidential tickets to the South East in 2023.

They argue that allowing the nation’s next president come from the zone would reduce friction and engender national cohesion.

Chairman of World Igbo Assembly (WIA), Dr Nwachukwu Anakwenze, who disclosed this in Awka, Anambra State, said the rally will take place simultaneously in the five states that make up the South East -Anambra, Enugu, Ebonyi, Abia and Imo states.

He said those being considered for the contest will be selected from present and past governors, senators and House of Representatives members who have performed well.

They also said that arrangement had been concluded to write President Buhari, the leaderships of the Peoples Democratic Party (PDP) and the All Progressives Congress (APC) to notify them of the need to cede the presidency of the South East.

He said: “We envision a leadership in Nigeria where leadership is based on ability to work hard, where fairness reigns with a sense of direction and accountability to the various groups and for the common good of the country.

“It is now the turn of South East region to provide good leadership for the good of all Nigerians so as to move Nigeria in a positive direction.

“Those we are considering for the presidential seat from Igbo are present and past governors, Senators and House of Representatives members from the zone who are performers.

“For the good of Nigeria, we believe our geo-political interest should extend to ethnic regions in Nigeria that aspire to its mission of uniting all Nigerians of like minds, through the concept of standing together for the betterment of the entire Nigeria.

“We believe in alignment. We cannot get presidency by ourselves, even if all the Igbo vote. We are already working with people from other zones and we are in talks with them already.

“Ndigbo and some other regions believe more in a restructured Nigeria. People can feel free to have their aspirations and you cannot stop them.

“There is need to restructure Nigeria to ensure true federalism based on regions or zones. We need Nigeria political structure that is based on equity, fair play, balance and equal access to political power for the good of all Nigerians”.

Anakwenze added that the Igbo stand solidly with all Nigerians across the ethnic divides and would always work for a progressive Nigeria.

An APC chieftain from the South East and Director General of Voice of Nigeria (VON), Osita Okechukwu, recently, appealed to the APC and PDP, to adopt the model used in 1999 when Chief Olusegun Obasanjo emerged the president by nominating candidates from the South East in 2023.

While advocating for a national consensus on Igbo presidency as recipe to create sense of belonging and save Nigeria’s threatened democracy, the VON DG said the only pragmatic answer to peaceful 2023 presidential election “is the Falae/Obasanjo model”, that saw the two candidates from the South West.

For the co-founder of 2023 Presidential Mandate Group, Prince Benedict Onyewuenyi, the agitation for the actualisation of Biafra by the Nnamdi Kanu-led Indigenous People of Biafra (IPOB) was the South East people’s way of expressing displeasure with goings on in Nigeria.

He said: “Biafra agitation is good for Nigerians to know that Igbo people are not happy; we are a people that have been stampeded to the wall. That agitation is to let the world and indeed Nigerians know that there’s no equity, fairness and justice in this country. The Igbo are marginalised. A lot of things are happening against our will in Nigeria; look at infrastructural development, the South East is nowhere. And I believe that if IPOB’s agitation is consolidated, we can never be together in this country.

“But if what we are pursuing is embraced and the presidency is ceded to the South East, there would be a sense of belonging and all this tension would be doused. Then, there would be national cohesion and the country would begin to witness progress and development.

0 comments on “2023: Push for national consensus for Igbo President”