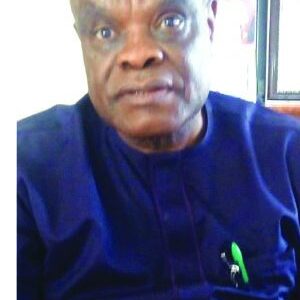 Mr Azubuko Joel Udah is a retired Deputy Inspector General of Police. Now a chieftain of the All Progressive Congress (APC), Udah spoke recently with NGOZI UWUJARE on a number of compelling national issues, insisting that the South-East is blessed with qualified, suitable personalities that could vie for the nation’s highest office in 2023. He also advised President Muhammadu Buhari to see every Nigerian as his own.

You recently hosted guests at your son’s wedding here in Abuja, with many prominent leaders of the APC in the South East in attendance. How were you able to attract these leaders?

Yes, that is possible because I am a prominent member of the APC right from my ward to the local government, to the state and the entire South East. By the Grace of God, those people that came are those that recognised the contributions I have made to the growth of our party, even though I didn’t run for any elective post in the last election. But I worked assiduously to ensure the growth and success of the party in the 2019 election.

What does this unity in APC in the South East hold for the 2023 general election?

Do you believe in zoning of the presidency come 2023?

There is a saying that what is good for the goose is also good for the gander. We have been rotating it, now it is supposed to come to our side and people are talking another thing. That is not fair. That’s my position on zoning of the 2023 presidency. There are very prominent and qualified people from the South-East that can run this country well and direct this country to become great and formidable. The Igbos have qualified people, they are there for all to see. People should embrace the Igbos as their brothers. They are human beings. I believe in the universality of men. There is nobody that is different from the other. Our former national anthem says “though tribes and tongue may differ, in brotherhood we stand. All groups, tribes, communities should be included in the sharing of presidential slots. There should be sense of inclusiveness and a sense of belonging.

The National Assembly has begun the process of amending the 1999 constitution that we are presently operating. How will you advise the lawmakers in this task?

They have the power and the right to amend the constitution, but they should make sure that the amendment is an inclusive one, where everybody will have inputs. As a person, I believe in peace. There should be a consensus on the amendment. If they don’t consult widely and reflect the views of the majority, they will be courting protests or resentment. As somebody that loves peace, I always believe in dialogue. There is nothing in this world that cannot be resolved through dialogue if there is sincerity of purpose.

Your party, the APC will soon start its congresses, what is your advice to the members?

Our party is well organised. In the South-East. Everything is on course and we are looking forward to a free and fair congress with no much rancour. People are campaigning. Those who want to be leaders at the Wards, local government level and the state level are busy campaigning and everything is going on well. This is because APC in the South East is well organised. We don’t have any problem.

What is your advice to President Muhammadu Buhari?

As the President and Commander – in – Chief of the Armed Forces, he is the president of all Nigerians. And whatever is happening, he should regard everybody as his own. At the inception of his administration, that was what he said – that he belongs to everybody and belongs to nobody. I just want him to embrace that promise so that everybody will be happy.