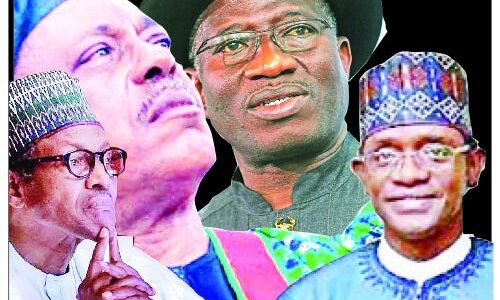 This past week, the ghost of agitation for power rotation came alive again to reopen the traditional fault lines between the North and the South. To be sure, Nigeria is not about to hold any general election, at least, not in the next one and a half years from now. According to the timeline already released by the Independent National Electoral Commission (INEC), the general election will hold on Saturday, February 18, 2023, but the guidelines for the schedule of activities for political parties would have to wait till after the Anambra State governorship election coming up on November 6.

Even at that, for some months back, there have been some whispers in the North over the possibility of change of arrangement on power shift, contrary to the gentleman’s agreement reached with their counterparts in the South in the previous elections.

The recent disquiet in the ruling All Progressives Congress (APC) has been linked to succession politics, while the opposition Peoples Democratic Party (PDP), which originally had the clause in its constitution remains in a dilemma.

President Muhammadu Buhari’s nephew, Mamman Daura, had sometimes ago deliberately roused the rabble when he called for the jettisoning of the zoning formula, saying merit and competence should be used to elect the next president.

“This turn-by-turn was done once, it was done twice, and it was done thrice. It is better for this country to be one. It should be for the most competent and not for someone who comes from somewhere,” he said in an interview with the BBC Hausa Service.

To avoid heating up the polity, the presidency had to distance Buhari from the comment, arguing that it was Daura’s personal view.

Despite the damage control, the remark sent out a wrong signal that the northern political establishment might be actively scheming to retain presidential power in the region in the next general election. And by so doing, Daura had wittingly provoked disapproval and suspicion of the state actors in the South, the fallout of which was the resolution passed by the 17 Southern governors on Monday in Lagos, insisting that power must shift back to the South in 2023.

The communiqué issued at the end of the meeting reads in part: “Rising from the meeting, the Forum agreed on the following: “Re-affirmed their commitment to the unity of Nigeria on the pillars of equity, fairness, justice, progress, and peaceful co-existence between and amongst its people.

“The Forum reiterates its commitment to the politics of equity, fairness and unanimously agrees that the presidency of Nigeria be rotated between Southern and Northern Nigeria and resolved that the next President of Nigeria should emerge from the Southern Region.”

Since the declaration, there has been a deluge of reactions from different interest groups in the North. The Northern Elders Forum (NEF) in its immediate response declared that the North would not be intimidated into yielding an office that ought to be settled democratically.

Speaking through its Director of Publicity and Advocacy, Dr Hakeem Baba-Ahmed, the Forum said: “We are running a democratic government and decisions over where the next president comes from will be made by voters exercising their rights to choose which candidate best serves their interest.”

Also, the Coalition of Northern Group, in a similar statement issued by its spokesperson, Abdul-Azeez Suleiman, expressed the same sentiment, accusing the Southern governors of ganging up against the North.

He described the proposed anti-open grazing law earlier agreed upon by the governors as retrogressive and a threat to the legitimate presence of pastoral communities in the South.

His words: “It is ironic for such leaders of a society that delights in unleashing mayhem against fellow citizens of other regions at the slightest of pretexts, to expect the other sections of the country to trust them or any of their protégés with presidential powers.

“The Southern governors’ resolutions in that regard have further exposed a deliberate attempt to impose a contentious system of a rotational presidency that turns all democratic norms and accepted indices of our national demography on their heads; a rotation system that is clearly aimed at achieving dubious political goals; and one clearly designed to weaken the North.

“The Southern governors’ threat to impose and enforce this undemocratic leadership selection process on the North, irrespective of its advantage of numerical superiority and inherent political strategy which is part of a calculated design to continuously weaken our region politically and pauperise it economically.”

In all of these sentiments, it is obvious that the group lacks a clear understanding of some contemporary realities. First, the remark that the Southern governors are plotting to pauperise the North is mere political sophistry. It doesn’t add up.  It only speaks to the failure of leadership which has cumulatively held on to power for over three decades without commensurate effort to address the pervasive poverty in the region. On the flip side, the tactical campaign by some Northern elements for the jettisoning of the principle of power rotation only reinforces the belief that some people are born to rule while others are mere spectators.

More importantly, CNG feigned ignorance of the fact that zoning or power rotation was a by-product of political alienation arising from the Nigeria civil war.

Primarily, it is a brainchild of the defunct National Party of Nigeria (NPN), which introduced the concept in the Second Republic as a strategy for the reunification of the country after the civil war. But for the sudden termination of the Shagari regime by the Buhari military administration, perhaps, the idea would have been entrenched in the political system.

It was to the credit of the same military cabal, however, that the idea became resurrected following the annulment of the June 12, 1993 presidential election believed to have been won by MKO Abiola. The imperative of ensuring the stability of succeeding civilian government compelled the power clique to entrench the policy of power shift in the constitution of the Peoples Democratic Party (PDP) and subsequently propped up Olusegun Obasanjo to take over the mantle of leadership as an appeasement to the aggrieved Yoruba in the Southwest.

And from Obasanjo to the tenure of the late President Umar Yar’Adua, the PDP kept fate with the arrangement until discordant tunes set in as a reaction to the second term ambition of former President Goodluck Jonathan. The crushing defeat the party suffered in 2015 general elections has been linked to the disaffection of the Northern elements who insisted that power must return to the region.

It is for the same reason that the Southern governors have collectively resolved and passed a resolution that the zoning arrangement which offered President Buhari the opportunity to serve for unbroken eight-year tenure must be respected for justice and equity to reign.

Conceived as a means of fostering unity among different ethnic nationalities, there is no gainsaying that the demand is a panacea for a stable polity.

This is even more imperative at a time when separatist agitations arising from the perceived marginalization of some sections of the country have assumed a threatening dimension.

Beyond the group’s sentiment, nonetheless, the issue of power rotation is purely a political issue that can only be resolved through dialogue and re-alignment of forces. These may soon start as the time ticks slowly, but steadily towards the 2023 election. Even granted that the North concedes power to the South, how the state actors in the region would agree to work together on a consensus candidate as to deliver a bloc vote is an issue political watchers would be interested to see in the months ahead. Over the years, the North has always found it easy to divide the three southern blocs to secure enough votes to win. While the effort by the governors to bury their political differences this time around and present a common front is seen as a welcome development, there is also skepticism that the honeymoon may soon be over when the chips are down.

For now, one unresolved puzzle is: who will concede what and to whom? Out of the three geo-political zones in the South, only the Southeast has not taken a shot at the presidency since the advent of the present political dispensation. The closest the region has ever had was the vice presidency of the late Alex Ekwueme. Even the six-month military regime of the late Gen Aguiyi Ironsi is often best referred to in history as an interregnum. Based on this perceived marginalization of the region, the campaign has, therefore, been on for consideration for the president of Igbo extraction.

How much success can come out of it, the answer is in the wind. Though the three zones are mutually dependent, they all nurture different aspirations. Going by the feelers coming from the All Progressives Congress (APC), the Southwest under the leadership of Asiwaju Bola Ahmed Tinubu is seriously angling to wrest power from the North in the 2023 election. Senator Adeseye Ogunlewe didn’t mince words about the preparedness of the Southwest to achieve power shift back to the region.

Speaking with Sunday Sun in an interview, he declared: “Southwest will produce the next president and we know the person already. It is Bola Tinubu.  Buthe has to struggle for it. Nobody is going to allocate it to him, but he is eminently qualified to be.”

Commenting on the aspiration of the Southeast for president of Igbo extraction, he added:  “They are not helping matters. The ongoing killings and general insecurity in the region are not helping at all. They have to approach it with dialogue. It needs diplomacy and wisdom. They have to sit down and approach it more reasonably. You have to go across the bridge to build alliances with people. If they don’t have confidence in you, they won’t vote for you.”

An estranged former political associate of President Buhari, Buba Galadima, also speaking in the same vein said: “I have a lot of friends from the Southeast, I can vote for any of them if they present themselves, but I do not agree with Igbo presidency.”

For him, the challenge of insecurity in the country is a threat to a peaceful conduct of the next general elections.

“The 2023 election is going to be extremely dangerous for every living Nigerian because there are people who have not performed and will try to divide us further and install their own puppet, who will close their back,” he posited.

A former governor of the old Anambra State, Dr. Chukwuemeka Eziefe, however, expressed strong hope that 2023 would offer an opportunity to Igbo to govern the country.

“Now that with Southeast, South-south, Southwest and Middle Belt are throwing their weight behind Igbo presidency, it is now left to Ndigbo to unite and achieve the target in 2023,” he said.

In the face of all of this, the opposition PDP is already in a dilemma over its zoning arrangement. One, the Secondus-led National Working Committee (NWC) has to contend with the rumoured ambition of Governor Nyesom Wike of Rivers State to be a running mate to a particular candidate from the North. The wind of defection which is still raging is also another major headache for the party, as it has already led to finger-pointing within the fold. Thus, while the leadership is working assiduously to evolve a strategy that would enable it to reclaim power in 2023, some stakeholders are apprehensive that taking a hasty decision on whether to zone its presidential ticket to the North or the South could further spell doom for the party.

Whichever way things go, only the unity of the South can assure the return of power to the region. There is optimism in some quarters that zoning the presidency to the Southeast may help the party to win the sympathy of the people, especially the Igbo.

These are intrigues that would come into play as Nigeria gets closer to the next general election in less than two years from now.