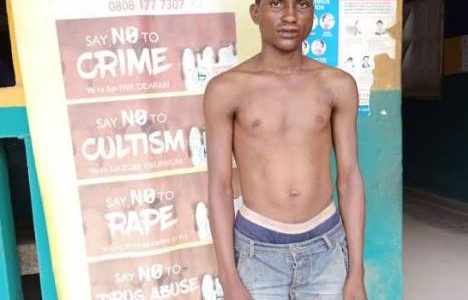 A 23-year-old  man, Badmus Qaudri has been arrested by the Police in Ogun State for defiling a  three year old girl.

Quadri was arrested on Thursday following a complaint by the mother of the victim who reported at the Owode Egbado Police Station that she noticed blood stain at the private part of her daughter when she returned from market.

The mother told the Police further that when she interrogated her daughter, the girl revealed that it was Quadri who took her into his room and raped her.

It was learnt that the Divisional Police Officer for Owode Egbado Division, Olabisi Elebutte, led detectives to the area and arrested the suspect after the victim identified him.

The Police Public Relations Officer, Abimbola Oyeyemi, who confirmed the arrest in a release on Friday, said Quadri was a neighbour of the victim’s parents.

Abimbola, a Deputy Superintendent of Police (DSP) added that the victim had been taken to the General Hospital, Idiroko, where the alleged defilement was confirmed.

However, the commissioner of Police, Kenneth Ebrimson, has ordered the transfer of the case to the Anti-human Trafficking and Child Labour unit of the State Criminal Investigation and Intelligence Department (SCIID) for further investigation and prosecution.

Ebrimson reiterated the readiness of the Command to deal decisively with whoever commits acts of rape or other forms of sexual violence against the girl-child, ladies and women in the state.

Cut his penis and give him to eat.