Abubakar Shekau: The mastermind behind the Chibok kidnappings 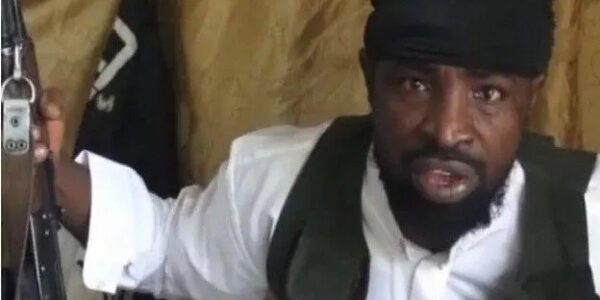 Abubakar Shekau, the infamous leader of the Nigerian Islamist group Boko Haram, is dead, a video published by its militants has confirmed.

Last month, a rival faction said Shekau, who masterminded the kidnapping of nearly 300 schoolgirls in 2014, had been killed during a confrontation with its fighters.

Boko Haram did not respond for weeks, but the BBC has now seen a video in which the militants confirm the commander is dead.

The Nigerian authorities have not commented on the news.

In the three-minute clip seen by the BBC, a man dressed in white clothes with a black turban urged his faction’s followers to remain loyal to the group despite the loss of their commander.

The man speaking is said to be Boko Haram commander Bakura Modu, who analysts believe may be the group’s new leader.

The list of atrocities that Abubakar Shekau was behind is long, but the mass kidnapping from a girls’ boarding school brought him global infamy.

Having taken over Boko Haram in 2009, Shekau turned it into a ruthless force that terrorised people in north-east Nigeria and beyond.

In 2014, its global profile changed after its fighters raided the school in Chibok.

A global campaign under the slogan Bring Back Our Girls brought the tragedy to light, but also provided publicity to Shekau.

A chilling video clip of him laughing about how he would sell or marry off the girls gave an indication of the kind of man he was.

Most of the girls have been freed. Some, however, are still being held and for them, their parents and many others in the region, the fallout from Shekau’s actions will be felt long after his death.

Nigeria’s most-wanted man was said to be a fearless loner, a complex, paradoxical person – part-theologian, part-gangster.

Fondly called imam or leader by his followers, Abubakar Muhammad Shekau was born in Shekau village in Nigeria’s north-eastern state of Yobe.

Shekau was said to have been killed by security forces in 2009 – only for him to reappear in videos posted on the internet less than a year later presenting him as Boko Haram’s new leader.

Similar subsequent claims of his death also turned out to be false.

The US government had offered a reward of up to $7m (£4.6m) for information about his location, but his whereabouts were never discovered.

Boko Haram’s founder, Muhammad Yusuf, died in police custody in July 2009, and hundreds of others were killed during a massive crackdown – which many blame for making the group even more violent.

Shekau is said to have been introduced to his predecessor in the Borno state capital, Maiduguri, by a mutual friend, Mamman Nur, who himself was wanted for masterminding a bomb attack.

All three were theology students – and Shekau was seen as the quietest and perhaps the most radical.

“He hardly talked, he was fearless,” said Ahmed Salkida, a journalist with such good access to Boko Haram that, at one stage, he was suspected of being a member.

“He is one of those who believed that you can sacrifice anything for your belief,” Salkida said.

Shekau and Nur carried on after the founder’s death but both men would later disagree on operational and ideological reasons, causing a split in the group.

Nur and other senior commanders were critical of Shekau’s leadership and in 2016 split from Boko Haram, according to the International Crisis Group.

The Nur faction which also had Abu Musab al-Barnawi, a son of Mohammed Yusuf, as a key figure, allied itself with the Islamic State group and took the name Islamic State in West Africa Province (Iswap).

Iswap accused Shekau of many crimes, including violating Islamic doctrine and in June 2018 called the Boko Haram leader a “tumour” to be removed.

Nur was reportedly killed in August 2018 by allies in Iswap who disagreed on his “softer” ideological views.

Boko Haram at a glance:

Who are Boko Haram?

The secret diaries of the Chibok girls

Shekau was fluent in his native Kanuri language, as well as Hausa and Arabic. He also added English sentences in the tapes his group released to journalists.

When Muhammad Yusuf was killed, Shekau was said to have married one of his four wives and adopted their children – perhaps, said sources who did not want to be named, to preserve Boko Haram’s cohesion or “purity”.

Shekau did not communicate directly with the group’s foot soldiers – he was said to wield his power through a few select cell leaders, but even then contact was minimal.

“A lot of those calling themselves leaders in the group did not even have contact with him,” Salkida said.

Shekau had neither the charismatic streak nor the oratorical skills of his predecessor – but he had an intense ideological commitment and ruthlessness, said people who study the group.

He issued a message in one of his video appearances which provided a major insight into his leadership.

“I enjoy killing anyone that God commands me to kill – the way I enjoy killing chickens and rams,” he said in the video clip released just after Boko Haram had carried out one of its deadliest attacks, in January 2012, killing more than 180 people in Kano, northern Nigeria’s largest city.

Shekau was also the group’s spiritual leader and, judging by video footage, he seemed comfortable delivering sermons to his followers.

“He had a photographic memory and was well-versed in theology,” Salkida said.

His followers nicknamed him “Darul Tawheed”, which translates as a specialist in Tawheed – an orthodox doctrine of the uniqueness and oneness of Allah, which is the very cornerstone of Islam.

But Nigeria’s mainstream Muslim clerics did not regard Shekau as a scholar and questioned his understanding of Islam.

They regularly condemned the bombings and drive-by shootings committed by his followers against anyone who disagreed with them, including many Muslims.

At Shekau’s death, Boko Haram is not the force it once was but it is still able to carry out attacks and has not been snuffed out by the military despite an extensive campaign.

His grim legacy though will live on in the suffering caused by the killings and kidnappings that he was responsible for.

0 comments on “Abubakar Shekau: The mastermind behind the Chibok kidnappings”