The Afa Igbo Bu Ofu(AIBO) and the Nnewi North Local Government Area chapter of the All Progressive Grand Alliance (APGA)on Saturday defied a heavy downpour to celebrate the Anambra State governor, Chief Willie Obiano, for his intervention at the Hundred Foot Road erosion site which had swallowed many properties and has even become a big threat to the Nnewi main market. 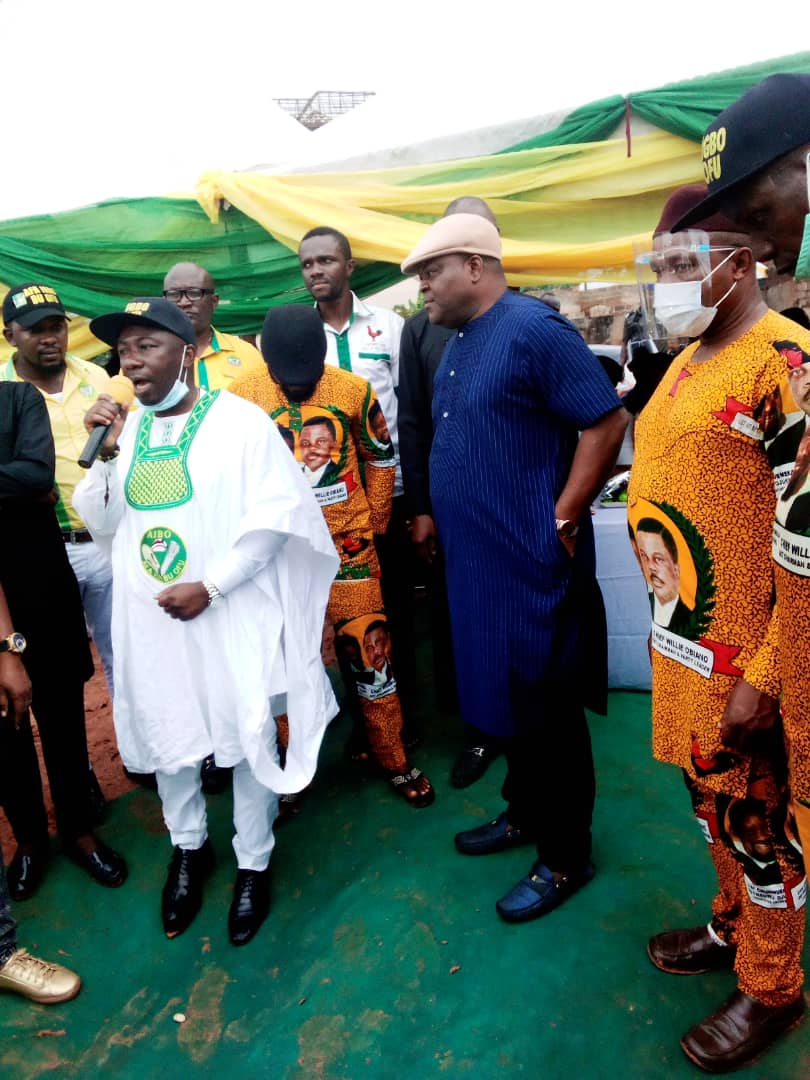 All the speakers at the occasion said that the Hundred Foot Road erosion site has actually become an issue for certain unscrupulous persons to play politics with before the governor moved in and invested over four billion Naira (N4b) to checkmate the rampaging gully erosion at the site. 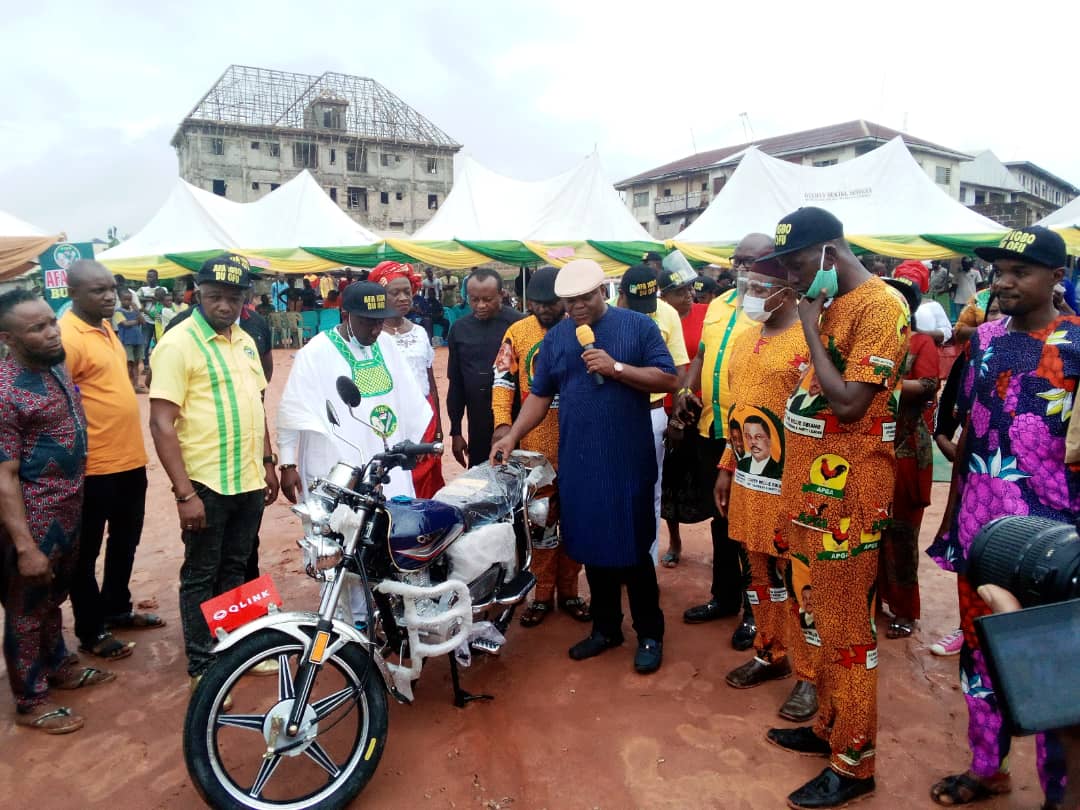 The chairman of APGA in Nnewi North Local Government Area, Hon Chike Agunwa, in his welcome address said that the governor’s intervention at the erosion site brought a huge relief to all and sundry as it was feared that the rampaging gully erosion at Hundred-Foot Road would spread to other parts of the industrial town. 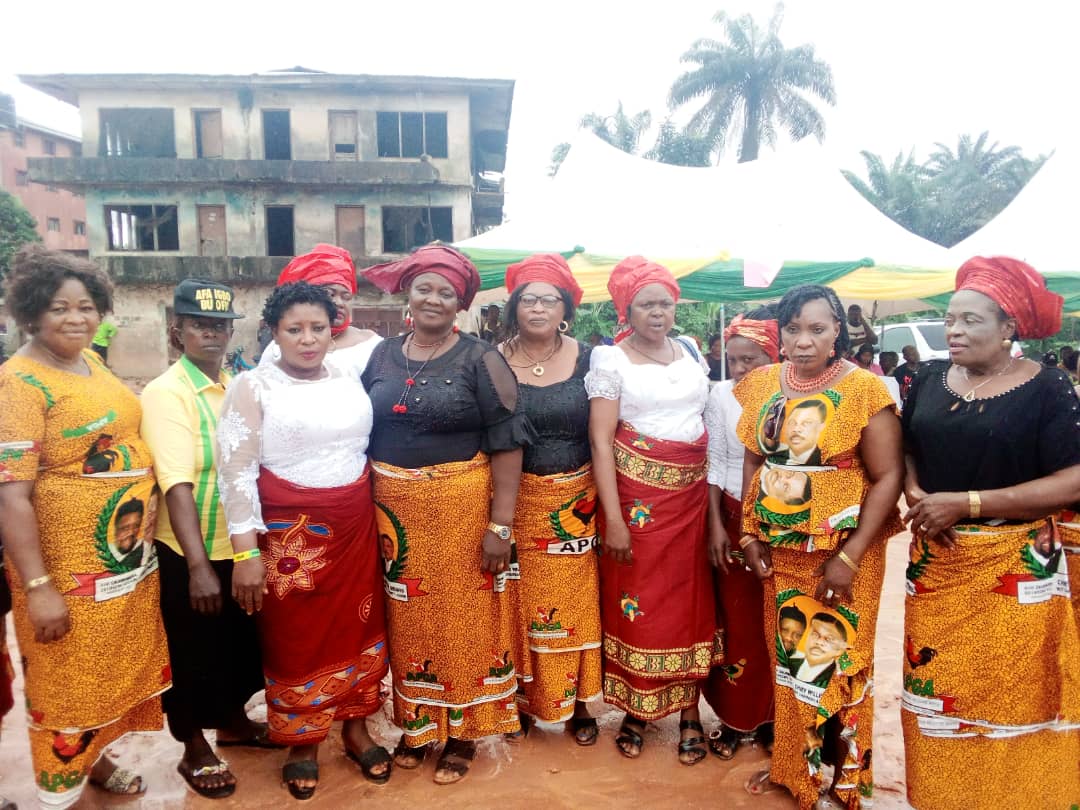 Hon Agunwa noted that the worst hit would have been the popular Nnewi main market which has attracted many financial institutions and other service sectors to the community.

In his speech, the President-General of Nzuko-Ora Nnewi, Sir Ugochukwu Udemezue, hinted that the volume of money (N4b) consumed by the erosion site is actually enough to construct many roads.

“It takes N150m to construct one kilometer road gutter to gutter, if we divide N4b with that, it is obvious that we just have to thank the governor for his love for Nnewi” Hon Udemezue noted.

He also thanked Chief Willie Obiano for buying all the vehicles he recently gave to the Royal Fathers in Anambra State from Innoson Motor Vehicles (IVM).

“The governor’s support for the people of Nnewi is proactive in terms of action and substance,” Ezeakukwu Emma Nsoedo said. He said that “the governor impacts the people of Nnewi by keeping them employed by supporting businesses such as Innoson Vehicle Manufacturing outfit that sustains the overall macroeconomic position of Nigeria beyond Nnewi” Ezeakukwu opined, during the phone interview.

Ezeakukwu further pointed out the tireless role Ogbuefi Melie Onyejepu has played in championing the erosion control projects in Nnewi. “Melie is the unsung hero in most of the state government-attracted projects to Nnewi community,” Hon Nsoedo argued.

The PG, Okpuno-Uzodike, Chief Tochukwu Nwokedi while thanking the governor for spending huge sum of money on Hundred Foot Road erosion site said that many buried corpse were actually washed away by the rampaging gully erosion.

The Nnewi Crown Prince, Obi Orizu in his brief speech said that the erosion site had actually become a big headache to the people of Nnewi.

He also thanked the governor for his prompt intervention in restoring the erosion site, in addition to other projects in Nnewi.

The lawmaker representing Nnewi North Local Government Area in the Anambra State House of Assembly, Hon Nonso Okafor recalled that the governor did not just work on the Hundred Foot Road erosion site but other erosion threatened areas like Obiofia Nnewichi and other places.

He said emphatically that the volume of money spent on the Hundred Foot Road erosion site by the governor is actually enough to construct two hundred kilometers road.

He said that by the time work is completed on the Hundred Foot Road erosion site, people would marvel at the transformation that would take place at the site.

The president of AIBO, Mr Onyedika Chukwuma (Acrobary) thanked the governor for the huge resources he committed to reclamation of erosion threatened communities in Nnewi.

He said that his group, which according to him is the foot soldier of APGA has been going round the state to celebrate the governor’s landmark remarkable projects.

The highlight of the occasion was the presentation of Qlink motorcycle to Mr Bonaventure Ogbonna(Abuja) for his commitment to AIBO and APGA.