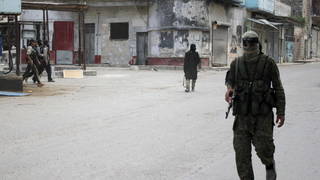 Terrorists in Syria’s northeastern province of Idlib are preparing to carry out a false-flag operation against civilians that they will then blame on Damascus, the Russian Reconciliation Center has said.

Citing intelligence reports, Rear Admiral Vyacheslav Sytnik, deputy chief of the Russian de-escalation mission in Syria, claimed that militants belonging to Hayat Tahrir al-Sham (HTS) have transported containers with toxic agents to the settlement of Tarmanin. The Al-Qaeda-affiliated terrorists plan to use the chemicals, believed to be chlorine, to “simulate” an attack resulting in casualties among local residents, Sytnik said. He added that the militants hope to then blame the incident on Syrian government forces.