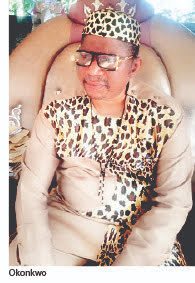 The Alor community in Idemili South Local Government Area of Anambra State has dissociated itself from the gross misconduct, act of sabotage, disloyalty against the State and attempted desecration of the Office of the Governor of Anambra State by some unscrupulous traditional rulers and businessmen including the suspended traditional ruler of their town Alor, Chief Elibe
Mac-Anthony Chinedu Okonkwo, whom they described as renegade.

In a release signed by the President General of the community, Chief Uzoma Igbonwa, the town stated their unequivocal support for the Governor and steps he has taken to restore sanity to their traditional institution.

The release said that the people of Alor are peace loving, law abiding and loyal to the Government of Anambra State and shall continue to do so.

It dissociates the entire community from the actions of Chief Elibe Mac-Anthony Chinedu Okonkwo whom they said was imposed on their community and has strangely been conducting himself to the disapproval of their people, culminating in the latest sabotage against the government of Anambra State.

It said further that the State Government may well see the reason the Alor community rejected the imposition of the traditional ruler by the past administration and more reason communities should be allowed to freely elect its traditional rulers in an atmosphere strictly guided by democracy, traditions and the norms.

The statement also thanked the Minister of Labour & Employment, Senator Chris Ngige, for swiftly acting to prevent the total desecration of the Office of the Governor of Anambra State before Mr.
President and the people of Nigeria.