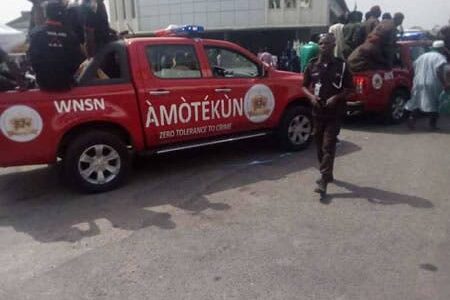 Authorities of the Oyo State Security Network Agency, otherwise known as Amotekun Security Corps on Monday arrested 25 armed Northerners travelling in a truck to the Ibarapa area of the state.

Tribune Online authoritatively gathered that the arrested were on board a mini-truck and were travelling to Eruwa in the Ibarapa area of Oyo State when they were intercepted around Ido community, an outskirt of Ibadan, Oyo State capital.

When Amotekun Security Corps operatives conducted a search on the truck conveying them and 25 guns, charms and 10 dogs hidden in the vehicle were discovered.

However, after the discovery, they argued that they were going into the bush for hunting expedition but they were not allowed to continue their journey.

Tribune Online reports that the Northerners were said to have been handed over to the police.

When contacted, the Police Public Relations Officer (PPRO) of Oyo State Police Command, Mr Olugbenga Fadeyi said he was not aware of the arrest.

But the Commandant of the Amotekun Corps in Oyo State, Colonel Olayinka Olayanju (retd.), confirmed the arrest by his men, saying “yes, they were arrested yesterday but I cannot talk much where I am now.”