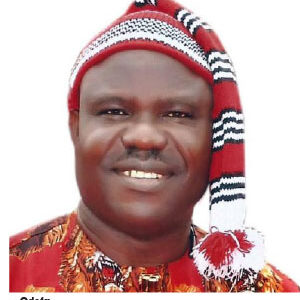 • Narrates how Umahi foisted his younger brother on party in Southeast

The National Vice Chairman (South East) of the Peoples Democratic Party (PDP) has said that the new zonal working committee of the party in the region under his leadership would do everything within its powers to recover all the party had lost in the zone.

He said that such recovery would start with this year’s governorship election in Anambra State.

This is even as he narrated how he lost the position he occupies now to the younger brother of Governor David Umahi of Ebonyi State, Chief Austin Umahi, when he contested for the post. Odefa is also from Ebonyi. He equally spoke on other issues of concern. Excerpts:

The Anambra governorship election is about 11 months from now. What package do you have for the state concerning the poll?

We are not unmindful of the fact that the PDP has been away from the Government House of Anambra State for about 16 years or thereabout. We are not undermining that fact. And, therefore, it is a catalyst that is propelling us to work even harder. If you were at the meeting I organized earlier today, I told the stakeholders that we have a lot of work to do to secure the governorship of Anambra State. We know that Anambra people are favourably disposed to the Peoples Democratic Party (PDP) and that’s why this time we want to do everything possible; starting from providing level playing field for all the aspirants to contest and then letting the most popular person to emerge as the candidate of the party. I will not tell you all what we have been doing; all our strategies. It is not for public consumption, but I can tell you that there are strategies that have been lined up to ensure that we capture the seat of governorship in Anambra State come this 2021 election.

Over the years, it has been alleged that the primary elections of your party in the past had not been transparent. And that had reportedly made some of your party faithful, especially the aspirants to move to other parties to sabotage the PDP as a revenge tactics. What effort are you putting in place to ensure that this doesn’t happen again especially for this election?

This has been our experiences in past elections. As I said earlier, we are talking to the aspirants and stakeholders, we are doing interpersonal visitations on the stakeholders and we are trying to guard against what was the norm in the time past so that such does not repeat itself this time around. And I can assure you and I can assure Anambra people that this time we are poised to get it right and we will get it right. The era when people are muscled down and ticket or candidacy given to a favoured candidate, that’s what leads to other aspirants, either defecting to other parties or sabotaging the party out of anger and annoyance of ill treatment. So, all these things we have put into consideration and we have put mechanisms in place to check them. And I can assure you, they will never happen again; not under my watch.

About a month ago or so, your party lost a sitting governor, Chief David Umahi of Ebonyi State to the All Progressives Congress (APC). We want to believe that part of your mandates is to recover lost grounds and reposition the party in the Southeast. So, what effort, in practical terms, are you making to reposition the PDP here?

The truth of the matter is that our opposition party is a party that has been totally rejected by the Igbo people. I want to tell you that the ideology and manner of administration of the ruling party is not favourable to Ndigbo. So, the Igbo can’t wait for the opportunity of election so that they can state this clearly. The states that the APC has in the Southeast were taken from the backdoor. Imo State was clearly won by the PDP. They went to the courts, through one manipulation or the other, they took Imo State. Ebonyi State is clearly a PDP state. But due to one flimsy excuse or the other, but I believe it is selfish interest; the man defected to the APC. But I want to tell you that we are not shaken by these loses. We are not discouraged. We have gone back to the drawing board to make sure that we recover all we lost. First, we will start with Anambra State. We will take Ebonyi back. Enugu is PDP. Abia is PDP. And let me also mention it, there is none of these governors that are intending to leave the PDP. The rumours have been everywhere, but they are not leaving. The governors we have in the PDP now, the governors of Abia and Enugu, are men of integrity. They are men with conscience. They are men that remember yesterday, men that remember where they are coming from. They are not leaving the party for whatsoever reason. So, I cannot begin now to tell you our strategies. If I disclose our strategies, our opposition will learn them and now fashion out ways to counter them. But I want to tell you that we are working; we are meeting people, we are talking to people. We are reconciling people with differences; we are reaching out to the people who have left the party in anger. We are doing all of these and I can assure you that the PDP will come out stronger. It is not leaving a party and going to another party. We are not in a shouting match with them. They are shouting, they are making noise. We are on the table, we are drawing, we are planning, we are putting things together and we are arranging. At the fullness of time, they will see the result of all this effort and it will shock them.

In the first place, it is not the duty or part of the functions of the zonal working committee or the zonal executive of the party to declare the region that the presidency will be zoned to. But I am going to speak as an Igbo man. I am going to speak as the National Vice Chairman of the party, South East zone. I would want the presidency to come to my zone. We have eminently qualified members of the party in the zone that could comfortably, conveniently and intellectually discharge the duties of the office of the president of the Federal Republic. There is no doubt about that. But, like I said, we have organs of the party whose duty it is to decide where the presidency is zoned to. But in my own case, in our own zone, we are going to be lobbying them for the possibility of zoning the presidency to the Southeast. We are eminently qualified and capable to deliver on such a position if given to the Southeast.

2019 Vice Presidential candidate of your party, Mr Peter Obi, said something about a month ago during the youth summit of your party. He said ‘If anybody knew how this man emerged the National Vice Chairman of PDP (South East), he will be surprised.’ He said that you had fought for this before, but it didn’t work but on a platter of gold, this came and dropped before you.’ Tell us; how did you emerged?

All along, I had never wished to be in Umahi’s government as a government official. I had always wanted to be in the party. And that made me in 2016 to honourably resign my appointment as the SSA to the governor on internal security to vie for this position of the National Vice Chairman. Of course, Governor Peter Obi was there along with all other major stakeholders from the Southeast zone. They saw that clearly, I was the candidate to beat until the governor of Ebonyi State muscled the entire process down and allocated it to his younger brother. So, I left it. So, what it meant was that, when the time was ripe, when the National Working Committee dissolved the Zonal Working Committee, of course, they thought of who to replace him. Somehow, I came to the mind of everybody. Without lobbying, without anything, they appointed me to lead the party in the zone. And here I am. That’s what he meant by ‘if you knew what he went through.’ Yes, I have vied for it. And if there was a level playing field, I would have won 98 or 99 per cent of the total votes cast. But the process was marred; the process was stalled. But here I am today as the National Vice Chairman eventually.

We heard a lot of stories about what happened that time. One of the stories had it that you went physical with your governor, Umahi, when he allegedly arm-twisted you and gave the position to his younger brother. Is it true?

No, there was nothing like that. For the purposes of the record, let me state clearly that Governor Umahi is somebody that I have been very close to. I wouldn’t go to the extent of going physical…

(Cuts in) They said that you held him at his jugular…

(Cuts in) No! No! No! That was not possible. I wouldn’t even abuse him. Even as it stands now, I won’t abuse him. I would only talk on issues; criticise issues, but I won’t abuse him. I wasn’t brought up that way; to abuse elders or people that have helped you in one way or the other in the time past. I recognise that fact. So, I wouldn’t do a thing like that. There was nothing physical, at all. Rather, it was some overzealous supporters or appointees of government that attempted to assault my person. That was where it ended.

Within you, are you really convinced that your party would win this year’s governorship election in Anambra State?