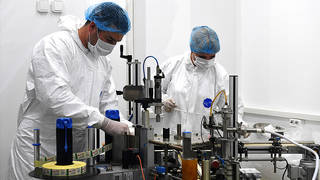 A mere week after Russia registered the world’s first coronavirus vaccine, the ‘Vector’ virology center in Novosibirsk has announced that an entirely different Covid-19 solution is entering the second stage of clinical trials.

As with the US, Russia is not putting all its eggs in one basket when it comes to a potential fix for coronavirus. Anna Popova, the head of the national health watchdog Rospotrebnadzor, announced on Monday that volunteers were injected with Vector’s experimental vaccine on August 12. Five days later, on August 17, a second group received the shot.

“Clinical trials are being carried out today, and all the specially selected volunteers are doing well,” Popova said. “Those who received the vaccine have not shown any adverse reactions, and there is not even the slightest reddening at the injection site.”

Vector, where the potential vaccine was created, is a world-class virology and biotechnology facility in Novosibirsk, the largest city in Siberia. The research facility contains one of the world’s most comprehensive collections of viruses, including Ebola, SARS, and smallpox.

On August 11, Russian President Vladimir Putin announced that the country had registered the world’s first Covid-19 vaccine, due to be available to the general public from January 2021. Before then, teachers and medical workers will be offered vaccination. The vaccine, named Sputnik V and produced by Moscow’s Gamaleya Research Institute of Epidemiology and Microbiology, has been criticized by some Western countries for what they say was unsafe rapid development and improper testing.

On Wednesday, Russian Health Minister Mikhail Murashko announced that that the first batches of the vaccine would be released within just two weeks.

0 comments on “Another Russian Covid-19 vaccine on the way? Siberian lab begins 2nd phase of trials just days after registration of Sputnik V”