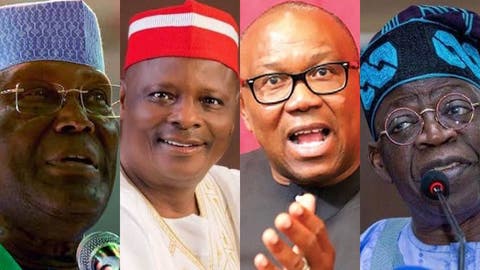 As the February 25, 2023 presidential election approaches, the candidates of the four major political parties – Atiku Abubakar of the Peoples Democratic Party, Bola Tinubu of the All Progressives Congress, Peter Obi of the Labour Party and Rabiu Musa Kwankwaso of the New Nigeria People’s Party, are battling to grab significant chunk of Kano’s six million votes, Ibrahim  Shuaibu reports.

The 2023 general election is not going to be business-as-usual in Kano State due to the emergence of many presidential candidates that have array of foot soldiers in the epic centre of political activities in northern Nigeria.  Kano voters have been warming up to vote for competent candidates of their choice from the four major contenders in the various political parties ahead of the next month’s presidential election.

Election of the president will be an exciting exercise in the political atmosphere of the state in view of the candidates’ renewed effort to garner the support of the people. Most of the presidential candidates have so far proven themselves going by their various ways of approaching the people.

The candidates of the four major political parties  are Atiku Abubakar of the Peoples Democratic Party (PDP), Bola Tinubu of the All Progressives Congress (APC), Peter Obi of the Labour Party (LP) and Rabiu Musa Kwankwaso of the New Nigeria People’s Party (NNPP).

The former vice president is believed to be a household name among the electorate in the state.

However, his albatross is that he lacks foot soldiers who would work and ensure his acceptance by the electorate who are very much familiar with his name.

The PDP stalwarts whom the Wazirin Adamawa is relying on are believed to lack sufficient number of followers in the state.

Again, the in-fighting between the Aminu Wali faction and the Shehu Wada Sagagi faction of the PDP in the state would not help matters for Atiku, as followers of the two groups are deeply polarised thus diminishing the chances of the presidential candidate and the party itself in the forthcoming poll.

However, the defection of Senator Malam Ibrahim Shekarau from the APC to the PDP could pull surprises in the favour of Atiku as the former governor of Kano State came in with large followership that might get millions of votes for the PDP presidential candidate. While politicians like the former Speaker of the House of Representatives, Hon. Ghali Umar NaAbba will also be a great asset for Atiku next month, a former Commissioner for Agriculture during the Kwankwaso-led administration, Hajia Baraka Sani will also secure votes from women for the former vice president due to her resourcefulness and being a good mobiliser in the state.

Abacha is the court-recognised governorship candidate of the PDP, and the matter is on appeal.

All these PDP chieftains will help Atiku to get votes in the state.

However, the dispute between the court-sacked governorship candidate, Wali and the court-recognised candidate, Abacha, may lead to protest votes against Atiku and play a spoiler-role in the ambition of the former vice president.

In Kano State, Bola Tinubu’s campaign crusade is being spearheaded by the ruling party in the state under the watchful eyes of Governor Abdullahi Umar Ganduje who has constantly boasted that the state would deliver the highest vote for Tinubu in the election.

In view of the large number of votes for grabs in Kano State, Tinubu has turned the state to his second home, after Lagos State by his regular visits to the state.

The APC is in control of the state’s 44 local government areas and majority members of the state House of Assembly and National Assembly members.

Ganduje had reportedly promised Tinubu that Kano State would repeat what happened during the 1993 presidential election when the state supported a southern candidate and rejected its citizen.

The governor has been making all the necessary consultations with key stakeholders of the party to make sure that Tinubu garners the majority of the votes in the state.

Tinubu had on several visits to the commercial nerve centre of the north, held meetings with business communities, Islamic and Christians leaders, politicians and elders of the state to rally their support for his long-time ambition to be the president.

However, concerns have been raised that some of the APC chieftains in the state might betray the former Lagos State governor.

The Leader of the House of Representatives, Doguwa had also raised the alarm in November last year that the ruling party might lose the largest state in northern Nigeria due to the crisis in the state chapter of the party.

He stated that the ruling party risks losing the state if President Muhammadu Buhari and Ganduje fail to intervene.

He said the party might lose to the NNPP led by the ex-governor of the state, Kwankwaso, whom he described as a formidable grassroots politician.

Doguwa had also alleged that the deputy governorship candidate, Garo, was a mole in the APC, allegedly working for Atiku, whom he described as Garo’s in-law.

All these are potential threats to the ambition of the APC presidential candidate.

The presidential candidate of the Labour Party (LP), Mr. Peter Obi is not very popular among the Kano voters as the majority of the people in the state are more familiar with Tinubu, Atiku and Kwankwaso.

Obi’s lack of popularity is due to the fact that he is a new name in the politics of the state.

However, the former Anambra State governor is very popular among the educated people, mostly the vibrant youth population, and those living in the area populated by non-indigenes called Sabon Gari.

It is believed that the popularity of the party’s governorship candidate, Bashir I. Bashir will help Obi to secure a large chunk of votes in the state. As a party, the LP is not actually strong in the 44 local government areas of the state, but the watchers of the political events in the state believe that the large number of non-indigenes in the state may likely turn the tide in favour of Obi.

Currently, campaign posters or billboards of Obi could be hardly seen anywhere in the state capital. The top politicians campaigning for Obi in Kano are Bashir, the party’s governorship candidate, and Ahmed Raji, the state chairman of the party, among others.

Rabiu Musa Kwankwaso is a well-known name among the entire citizens of the state, because he served as the governor of the state for two terms and was also a senator for the Kano Central senatorial district. Kwankwaso, the presidential candidate of the NNPP, is the leader of the popular Kwankwasiyya Movement whose symbol is redcap. The redcap crusaders loyal to Kwankwaso can be spotted in every nook and cranny in the state.

Currently, campaign posters or billboards of Obi could be hardly seen anywhere in the state capital. The top politicians campaigning for Obi in Kano are Bashir, the party’s governorship candidate, and Ahmed Raji, the state chairman of the party, among others.

Rabiu Musa Kwankwaso is a well-known name among the entire citizens of the state, because he served as the governor of the state for two terms and was also a senator for the Kano Central senatorial district. Kwankwaso, the presidential candidate of the NNPP, is the leader of the popular Kwankwasiyya Movement whose symbol is redcap. The redcap crusaders loyal to Kwankwaso can be spotted in every nook and cranny in the state.

Kwankwaso, a grassroots politician, controls the major political class in the state and has cult followership cut across the 44 local government areas.

Majority of his supporters consider him as the Messiah of the common man.

He had contributed immeasurably to the progress of the state during his administration. Kwankwaso served as Kano governor on the PDP platform but later defected to the APC in the build-up to the 2015 general election. He joined the NNPP after falling out with his handpicked successor and current governor, Ganduje.

The next month’s elections will clearly show his strength in the political atmosphere of Kano. His teeming supporters have always vowed to massively vote for him to ensure that he defeats the other three contenders in the state.

Some analysts therefore believe that with the uncertainty surrounding every election, Atiku, Tinubu and Kwankwaso, will end up sharing the votes on relatively equal basis, while Obi struggles to get the required 25 per cent.

Others, however, argue that the battle would be fiercely contested between Tinubu and Kwankwaso.