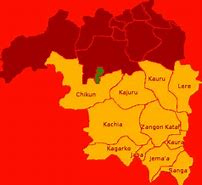 Some bandits in the early hours of Saturday raided Baka Village in the Igabi Local Government Area of Kaduna State, killing two persons.

The bandits, who stormed the community in large numbers, were said to have invaded the village with the intention of kidnapping a farmer and his son.

The State Commissioner for Internal Security and Home Affairs, Samuel Aruwan, who confirmed the incident, noted that the farmer and son resisted being kidnapped and were shot died on the spot.

The commissioner gave the name of the farmer as Dan’Azumi Musa and the son, Sanusi Dan’Azumi.

According to the report, the bandits, while shooting sporadically, forcefully gained entry into the residence of one Dan’Azumi Musa, a farmer in the area, attempting to kidnap him and his son, Sanusi Dan’Azumi. Upon resisting the bandits, they were both shot dead.