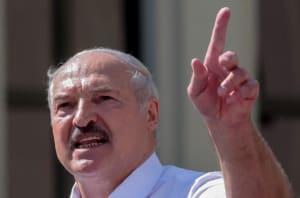 European Union leaders gathered in Lisbon on Thursday to discuss further economic sanctions on Belarus following its widely-condemned forced landing of a Ryanair passenger plane, The Times reported Friday. The country’s authoritarian leaders were looking to arrest a 26-year-old political dissident on board.

The latest EU sanctions are expected to target Belarus’ “most important industries and its financial sector,” per the Times. Said Lithuanian Prime Minister Ingrida Simonyte: “This is an unpredictable regime from which you can expect anything, and you have to be prepared for anything.”

On Wednesday, Belarusian President Alexander Lukashenko recoiled at the mention of sanctions, threatening to “loosen border controls” against “Western-bound illegal immigration” and drug trafficking in response, per The Associated Press. “We were stopping migrants and drugs — now you will catch them and eat them yourself,” said Lukashenko.

Lukashenko had gone so far as to assert the possibility of another world war should something “[flare] up” in Belarus, per AP. “We will respond firmly to any sanctions, attacks and provocations … because you in the West are giving us no other choice,” warned the leader, claiming Western sanctions are fueled by “envy, helplessness, and anger.”

German Foreign Minister Heiko Maas has said “targeted sanctions” will be only “the beginning of an economic and financial crackdown” if Lukashenko refuses to shape up, Politico writes. Austrian Foreign Minister Alexander Schallenberg, however, suggets the EU take a more cautious approach so as to ensure restrictions do not “drive the country into Russia’s arms.” Read more at Politico.