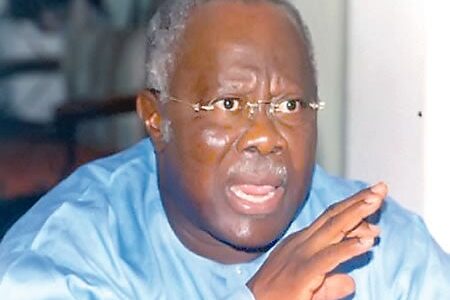 A chieftain of the Peoples Democratic Party (PDP), Chief Bode George yesterday stressed the need for unity and equal representation of members from different zones in the party.

According to him, the act of balancing, which the founding fathers of the PDP stood for, had been distabilised and eroded by a few people. This, according to him was what the G5 Group and others who believe in unity are presently fighting to achieve.

He listed the hierarchy of the party to include: President, Vice President, Senate President, Speaker of the House of Representatives, Secretary to the Government of the Federation (SGF) and Party Chairman.

George noted that for the purpose of unity, the positions are usually evenly distributed across the six geopolitical zones, but decried a situation where the current distribution of powers within the PDP, has been lopsided.

He, however said all doors were still open for reconciliation to address the imbalance in the party system.

“There is nothing wrong if party members disagree on certain issues, but what matters is for the party to keep to all agreements reached, especially the Port Harcourt accord, where party members agreed on balancing the positions in the party’s hierarchy.

“Twenty-four hours in politics is a long time and going by the remaining 93 days to the general election, one can understand that we still have ample of time to reconcile our internal issues and our doors of reconciliation has not closed,” George said.

He said the party has major challenge that needed to be addressed, adding that the party’s presidential candidate, Atiku Abubakar must address the challenge before the general election in February next year.

Citing the major challenge affecting the party, George said: “The presidential candidate is from north-east, the party chairman is from north-central, the Director General of the Atiku campaign Group is from north-west, while party members from other zones are just on-lookers, and we are saying the structure is lopsided and must be balanced for the purpose of fairness, equity and justice, which the party stands for, because what is good for the goose is also good for the gander.”

Asked why he was not supporting the party’s governorship candidate, George said the real national issues had also affected issues at the state level, saying that unless the national issues were addressed, the state issues would continue to linger.

“Olabode George will not be in a place where there is chaos, display of uncivilised behaviour, disrespect for the rule of law, and I will continue to tell the truth to power, because there is no political party that does not have its internal issues to settle. What matters is the ability to settle the issues amicably,” George said.