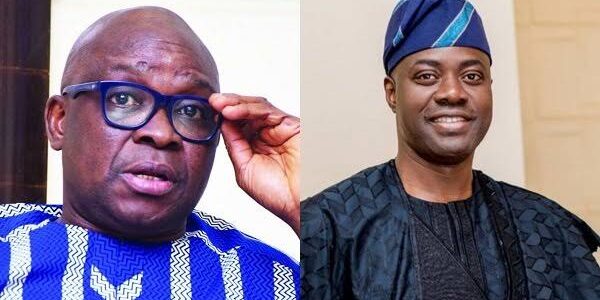 Arapaja, who had the backing of Governor Seyi Makinde of Oyo State polled 343 votes to defeat a former zonal chairman, Dr. Eddy Olafeso, who was the candidate of former Governor Ayo Fayose of Ekiti State.

The chairman of congress, Governor Samuel Ortom of Benue State, who was represented by his deputy, Benson Abounu, declared Arapaja the winner of the keenly contested election.

Recall that while addressing delegates earlier on Monday, both Governor Makinde and Fayose promised to work with whoever emerge winner as the chairman of the party in the zone.

Fayose left the WOCDIF centre venue of the congress shortly before the results were announced.

Meanwhile, Olafeso has conceded defeat, promising to work with the Arapaja to reposition the party in the South-West.

For his part, the new zonal chairman Arapaja, also lauded his co-contestant and thanked Governor Makinde and former Governor Fayose for their roles in the party.

Arapaja said: “We thank Governor Seyi Makinde and former Governor Fayose. It’s our party. We will work together and move the party forward. We want to reposition the party. I will work with my brother Olafeso to achieve our aims.”

Counting of ballots for other elective positions in the zonal executive committee were ongoing as at the time of filing this report.