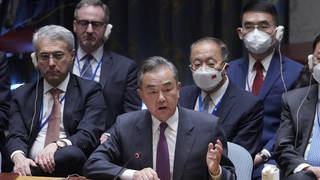 Moscow and Kiev should resume dialogue “without preconditions” or assuming an outcome, Chinese Foreign Minister Wang Yi said on Thursday during a UN Security Council session on Ukraine.

In line with China’s “consistent and clear” neutral position on the Ukrainian conflict, the minister reiterated that the sovereignty and territorial integrity of every state should be respected, and the security concerns of all the parties taken seriously.

The only way out of the conflict is through “dialogue and negotiations,” Wang said.

“The main priority for the parties is to resume dialogue without preconditions,” he said, calling on everyone involved in the conflict to show “restraint.” China is prepared to support “all efforts that could help solve the crisis,” he added.

He hailed the positive role of the International Atomic Energy Agency (IAEA), which sent a mission to Ukraine’s Zaporozhye nuclear plant this month, saying there was “no room for trial and error” when it comes to the safety of nuclear facilities. Among other priorities, Wang also named easing the humanitarian situation and ensuring the security of global food and energy markets.

Upholding the United Nations international system, Wang said, is paramount to prevent “any form of hot war or the so-called new cold war.”

During a meeting with his Russian counterpart, Sergey Lavrov, on Wednesday, Wang also expressed hope that all parties of the conflict would “refrain from giving up dialogue efforts and resolve security concerns through peace talks.”

Kiev and Moscow haven’t returned to the negotiating table since talks in Istanbul in late March fell through. Last week, Russian President Vladimir Putin said that Russia was ready to end the conflict “as soon as possible” but claimed Kiev was not willing to negotiate peace.

On Wednesday, Putin announced the partial mobilization of Russian reservists and claimed that his country was now fighting “the entire Western military machine” in Ukraine. Western supporters of Kiev responded to these remarks by pledging to maintain or even to increase support for Ukraine and to keep putting pressure on Moscow.