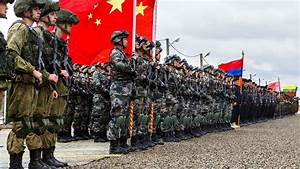 China continues making moves that threaten to increase tensions with its neighbors, including India, as it expands on plans to build settlements along the disputed border with Bhutan.

China in 2017 revealed plans to build over 600 villages in border areas in the Tibet Autonomous Region (TAR), and it has made moves to consolidate control over a region that would have implications on relations with India. Tensions flared after Chinese teams began building a road onto the Doklam Plateau, but both China and India backed down after withdrawing troops and engaging in discussion.

But satellite images analyzed by Reuters indicate that China plans to step up tensions by continuing to press its claim by building settlements along the border with Bhutan.

The image analysis, carried out by U.S. data analytics firm HawkEye 360, revealed over 200 structures, including two-story buildings, under construction in six locations all within the disputed region.

Construction of the buildings started in early 2020 before the last big clash between China and India, but construction accelerated in 2021. Initial plans showed building tracks for a number of large buildings, but new, smaller structures have gone up, possibly to serve as storage for equipment or supplies, according to HawkEye 360 mission applications director Chris Biggers.

But China’s foreign ministry insisted that the construction is “entirely for the improvement of the working and living conditions of the local people.”

“It is within China’s sovereignty to carry out normal construction activities on its own territory,” the ministry said on the matter. China has used construction to help press claims in disputed areas, such as the man-made islands in the South China Sea. That dispute involves China, Vietnam, the Philippines, Brunei, Malaysia, and Taiwan. Japan is not a direct claimant but has recently become involved, backing those opposed to China’s claims. Japan is one of the United States’ closest allies in the region.

The images of the construction along the Bhutan border show little in the way of convenient resources or nearby populations. The building activity also occurs in areas where no there was no previous construction.

Some experts also speculate that the locations of the settlements might provide new bases of operation in more distant areas over which China wishes to maintain control. The area would give China greater access to the “Chicken’s Neck” area, a strategic strip of land that connects India to its northeastern region.

“China’s village building across the claimed Bhutan border appears to be designed to force Bhutan to yield to Chinese demands in their border negotiations, now in their 24th round after 37 years,” said Robert Barnett, a professorial research associate at SOAS University of London, who is an expert on Tibet and has studied the China-Bhutan border closely.