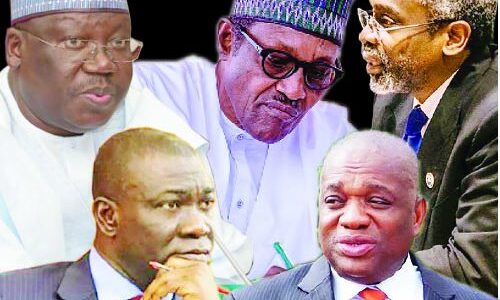 The two-day public hearing on the review of the 1999 Constitution organized by the National Assembly has finally come to an end.

The exercise held simultaneously at 12 designated centres in the six geo-political zones on May 26 and 27 following the suspension of plenary by the Senate.

According to the Senate President, Ahmad Lawan, the suspension became necessary in order to allow the lawmakers to participate in the process.

If the amendment process successfully scales through, this would be the fourth alteration to the 1999 Constitution. Among other things, clamours for state police, devolution of powers to the states and local governments, creation of more states, restructuring and fiscal federalism formed the fulcrum of presentations by the stakeholders at the zonal public hearings in the 12 venues nationwide.

In the Southwest, except for the governor of Lagos State, Babajide Sanwo-Olu, who advocated special status for Lagos, aggregate of representations centred around devolution of powers, state police, restructuring and financial autonomy of local governments, as well as true fiscal federalism.

Towards this realization, the Ondo State governor, Mr. Rotimi Akeredolu called for a return to the 1963 Constitution which allowed the three regions to develop at their own pace.

For the South-south geo-political zone, review of revenue allocation formula, oil derivation, state police, as well as power devolution were the major proposals presented before the committee on the review of the constitution.

While Senator Ifeanyi Okowa of Delta State wanted a new constitution rather than an amendment of the 1999 document, his Bayelsa State counterpart called for a true federalism with 100 per cent resource control.

Edo State delegation led by Hon. Marcus Onobun submitted proposals for about 30 alterations, including demands for state police, gender equality and true federalism, among others.

At the Northeast zonal hearing in Bauchi, Bauchi State governor, Senator Bala Mohammed, identified inadequacies in the constitution to include revenue allocation, security provision, as well as inclusiveness in running the affairs of the country.

He expressed the hope that the move would provide the change needed for the betterment of the country. According to him, the North-eastern part of the country as the most devastated by insurgency and educationally disadvantaged was shortchanged in the constitution, hence the need for the review.

In the Northwest, Governor Nasir el-Rufai of Kaduna State, who spoke in his personal capacity, stressed the need for a truly balanced, equitable and fair federal structure. And on that note, he proposed 10 items which should be shared responsibilities between the federal and state governments.

He said: “The reality of our security situation today requires that Nigeria must strengthen its military and security agencies. This includes decentralising the police to enable the states to exercise effective control in securing their residents and communities.

The Southeast’s popular agitations included creation of additional state in the region, state police, power devolution, as well as restructuring.  Chief Whip of the Senate, Dr Orji Uzor-Kalu  after the review in the zone said that they have articulated what they would take back to the National Assembly as presented by the zone.

In the meantime, some stakeholders have expressed divergence views on their expectations of the outcome of the review process.

While some commended the initiative as a welcome development, others dismissed it as an effort in futility.

A former governor of the old Anambra State, Dr Chukwuemeka Ezeife, speaking with Sunday Sun, said:  “Nothing comes out of any effort to review the constitution. What we need urgently is a new constitution and restructuring. Restructuring saves Nigeria from breakup. Any other thing is a waste of time.”

According to him, the only panacea for peaceful co-existence is for the country to abandon the current unitary structure imposed by the military in favour of the old regional arrangement.

“We should get away from unitary government imposed on us by the military and return to the regions or zones and remove most of the powers on the Exclusive List. Those who are not willing for Nigeria to grow may resist restructuring. But anybody who loves this country will go for restructuring emergence. Looking at the recommendations of the 2014 conference will solve most of the agitations holding the country down.”

Similarly, a renowned constitutional lawyer, Dr. Tunji Abayomi, also said in a cynical tune: “Nothing will come out of the exercise. It is a waste of time. The point is that a nation made of different nationalities needs to sit round the table and put forward its expectations of what Nigeria should be. That has not happened because of the problem of the current constitution.”

In his opinion, it is only a new constitution that can guarantee the stability of the country.

“What the National Assembly needs to do is to exercise delegated power given to it by the electorate to pass a law to enable the people to give themselves a constitution. A constitution that is illegitimate is neither amenable nor amendable. It is idiotic and stupid to do the same thing all over again and expect a different result. This is the fourth alteration. Why have the agitations not subsided in spite of the previous amendments? Why is the agitation getting worse? So, the exercise will end up being an effort in futility. America had the same challenge in 1777 under the article of confederation and perpetual union. When they realized that the constitution was creating imperfect governance, they came together in 1786 and adopted the present constitution that makes it the greatest nation in the world today. Unless we do the right thing, we will never get a perfect nation.”

Prof Itsay Sagay while also dismissing the exercise, berated the legislators for lacking the credibility to undertake the process.

“The record of the National Assembly is not encouraging. All the alterations to the constitution they have passed so far are totally irrelevant and not coherent with restructuring,” he said.

However, the former Adviser to ex-President Goodluck Jonathan, expressed confidence that the constitution amendment would address some of the challenges confronting the nation.

He said: “If we are truly operating a constitutional democracy, we all have to recognise the fact that every power derives from the constitution. It is that constitution that the National Assembly is trying to amend to address the agitation that is all over the country.

Responding to the argument about the need for a new constitution, he said either way the country would be better for it.

“What we need is power devolution to states and local governments. But then, operators of the constitution must be sincere about it,” he declared.

“I hope some real amendment will be made this time because year-in year-out attempts have been made to do the amendment, but we hardly see the conclusive end of the process. This time around, the exercise should be concluded so that we can see the result. If Nigerians want a wholesale constitution and if they can go about it, nothing should stop that,” he posited.