Count me out of social media bill, says Makinde 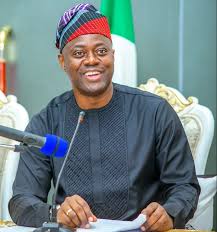 Oyo Governor Seyi Makinde has distanced himself from the proposed clampdown on social media through regulation.

Rather, he said the Governors only resolved the existing Cybercrime Act (Cybercrime Prohibition Prevention Act, 2015) should be allowed to take its course instead of duplicating an existing law in the name of social media bill.

He spoke on Tuesday while inaugurating an 11-man judicial panel at the Executive Chamber of the Governor’s office, Agodi, Secretariat, Ibadan.

The panel is chaired by a retired Chief Judge, Justice Badejoko Adeniji while Mrs. Oluwafolake Ogundele, an Assistant Director, Department of Public Prosecution, Ministry of Justice is to serve as Secretary.

Makinde said about 50 petitions have been received through the official portal created for members of the public to register their complaints.

On the social media regulation, he said: “Let me categorically state that as far as I know, there was no such communiqué from the Southwest Governors that I am part of.

“Yes, I was in Lagos on Sunday, we did hold a meeting but our agreement at the meeting was that we already have an existing Cybercrime Act (Cybercrime Prohibition Prevention Act, 2015), so there was no need for any further duplicity in terms of a specific social media bill.

“So, should anyone choose to sponsor such, I should be categorically be counted out. Because the Cybercrime Act is extensive enough and covers any issues that any so-called Social media Bill may seek to address.”

He urged members of the public with legitimate case of human right violations to bring same forward to the panel with evidence, nothing that such is the only way the job of the panel could be easily done.

“Some people have said it will not yield any result. Well, the only way it can produce a result is if people present their cases and bring evidences to support them, so that the panel can make their recommendations which will then be adopted and implemented.

“So, something would happen if people are able to come forward and present their cases before the panel.

“When it comes to judicial matters, it is a matter of evidence. Even if your brother is the judge, if you don’t have any evidence, nothing is going to happen.”

0 comments on “Count me out of social media bill, says Makinde”