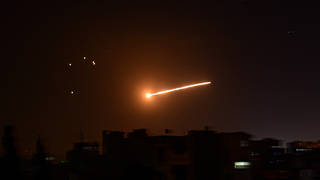 Damascus came under an apparent missile strike late on Monday. Sirens were heard across the city, while air defense systems intercepted incoming projectiles.

The missiles flew from the Israeli-occupied Golan Heights region, Syrian state media reported, pinning the blame for the attack on Tel Aviv.

Several videos from the scene show projectiles streaking through the sky. Footage suggests that the Syrian military scored at least one hit on the targets.

No information on potential casualties and damage on the ground has emerged so far.

Syria’s capital city, as well as other locations across the country, routinely come under mysterious missile strikes. While the Syrian government attributes such attacks to Israel, Tel Aviv rarely comments on its involvement.

In a rare exception, Israeli PM Benjamin Netanyahu last year openly bragged about his military carrying out “hundreds” of air strikes on the Syrian territory, citing the need to prevent Iran from entrenching there. Syria hosts a number of Iranian military advisers, who have been invited by Damascus to help the country in its fight against international terrorism.