Derek Chauvin Guilty of Murder in Death of George Floyd 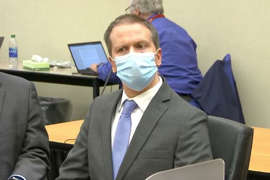 Derek Chauvin was found guilty of murder in the death of George Floyd, a Black man whose death last May in police custody was captured on video that went viral and set off a summer of unrest over law enforcement’s treatment of people of color.

Mr. Chauvin sat impassively as Judge Peter Cahill read out the jury’s verdict that he was guilty of second-degree murder, third-degree murder and manslaughter. Wearing a mask, the former Minneapolis police officer was handcuffed and taken out of the courtroom after the judge revoked his bail and remanded him to the Hennepin County sheriff’s office.

Over 14 days of testimony from dozens of witnesses, prosecutors built their case largely around a cellphone video that emerged a day after the May 25, 2020, killing. It depicted Mr. Floyd handcuffed and facedown in the street as Mr. Chauvin, who is white, knelt on his neck and back for more than nine minutes. Mr. Floyd, who was 46, pleaded for his life, called out to his mother and eventually passed out. Police were responding to a report that Mr. Floyd had used an allegedly counterfeit $20 bill to purchase a pack of cigarettes.

Prosecutors were under considerable pressure from activists and politicians to win a murder conviction in the case.

Defense lawyer Eric Nelson said shortly before the verdict came in that he didn’t plan to address the media upon a guilty verdict and didn’t answer a question about whether he planned to appeal. Before and during the trial, he repeatedly asked to move the case out of Minneapolis, arguing that the air of tension in Hennepin County made it difficult for jurors to render a fair verdict out of fear for their own safety. He also complained about the city of Minneapolis’s decision to announce a $27 million settlement with Mr. Floyd’s family in the middle of jury selection.

After closing arguments on Monday, Mr. Nelson made a motion for a mistrial based on comments by U.S. Rep. Maxine Waters (D., Calif.), who last weekend called on protesters to get more confrontational if the jury didn’t bring back a guilty verdict. Judge Cahill denied the motion but said Mr. Nelson might have grounds for an appeal based on Ms. Waters’s comments.

After the verdict was read, a festive scene unfolded in a park next to the fortified Hennepin County Government Center. Sustained exuberant cheers went up as the news spread. “All three counts!” the crowd said together

Men, women and children raised their fists and screamed their approval. A few started crying. One man hugged another, slapped his back and said “It’s been a long time coming.”

“It’s a beautiful day in America,” said Farji Shaheer, a 41-year-old Black man who lives in Minneapolis. “It feels great to be recognized as a human being.”

Trahern Crews, founder of Black Lives Matter Minnesota, said he was very happy with the verdict. “I’m excited that our justice system told us that Black lives matter for once in Minnesota,” he said. “A lot of the work that the people did really, really, really paid off in a big way, and I think it’s gonna pay off for future generations too.”

The trial unfolded on live television and the internet before millions of viewers, amid an atmosphere fraught with racial tensions. Not only was the live-streaming of a criminal trial unprecedented in Minnesota, trial experts say they can’t recall another murder case in which the death at issue and the defendant’s actions were so graphically captured on video in so many angles.

“The accumulative effect of having so many camera angles is the jury and the world watched George Floyd die over and over and over again throughout this trial,” said Brockton Hunter, a Minneapolis defense attorney who closely followed the proceedings.

On trial wasn’t just Mr. Chauvin but the technique that he used to subdue Mr. Floyd, who is among dozens of suspects and inmates over the years who died in custody after authorities kept them restrained on the ground facedown.

No other fatal incident involving a prone restraint ever led to the serious charges leveled after Mr. Floyd’s death, much less resulted in a criminal conviction of officers involved, according to researchers tracking police prosecutions. Brutality cases against officers over prone restraints are almost always battled in civil court, with wrongful-death lawsuits that sometimes resulted in negotiated settlement payouts.

Perhaps most challenging for the jury was parsing all the complex and technical scientific evidence and weighing contradicting testimony from pathologists and other medical experts who took the stand.

Prosecutors anticipated from the start that Mr. Floyd’s fentanyl use and serious heart condition were potential sources of doubt. They covered the potential pitfalls with a battery of medical experts who ruled out a drug overdose and use-of-force experts and senior law-enforcement figures, including the city’s police chief, who said the prolonged restraint went against officer policy and training.

The chances of a conviction appeared more likely after jurors heard from Martin Tobin, a Chicago-area pulmonologist who testified for the prosecution that Mr. Floyd died from asphyxiation.

On the stand, Dr. Tobin said he had watched the arrest video footage hundreds of times, pointing to the exact moments where he could tell Mr. Floyd lost consciousness and was depleted of oxygen, around three minutes before Mr. Chauvin got off him. He described how Mr. Floyd appeared to be using his fingers and knuckles against the street and the tire of a police squad car as a sign of how distressed his breathing had become. And he asserted that even a healthy person would have died under Mr. Chauvin’s weight.

The defense also had its own medical expert, David Fowler, former chief medical examiner for the state of Maryland, who contradicted prosecution experts about the danger of the prone restraint and buttressed Mr. Nelson’s argument that Mr. Floyd had succumbed to drugs and health problems.

Mr. Fowler’s opinion was still that of one person. In the battle of experts, “sometimes there’s power in numbers,” said Michael J. Brandt, a Minnesota criminal defense attorney who closely followed the case.

Throughout the trial, Mr. Nelson tried to defend Mr. Chauvin’s actions as a reasonable use of force. Trial observers said it was the weakest part of his case.

The defense struggled to justify the more than three minutes that Mr. Chauvin held Mr. Floyd under his knee after he lost consciousness. The Minneapolis police chief, Medaria Arradondo, was among a number of prosecution witnesses who said once Mr. Floyd stopped resisting, Mr. Chauvin should have lifted up his knee and moved him to his side.

To counter the charge of recklessness, Mr. Nelson tried to make jurors see things from Mr. Chauvin’s perspective. His defense attorney said he was doing his job while distracted by the threat of a growing and angry crowd of onlookers.

But his descriptions of the crowd may have seemed exaggerated to jurors watching the actual scene from the video. Some legal observers said the testimony from the bystanders made them seem more traumatized than dangerous.

“It totally nullified the idea that this crowd was unreasonably hostile or aggressive,” said Mr. Hunter.