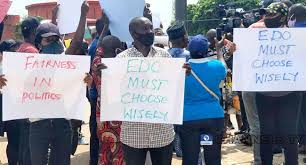 Hundreds of Edo youth, under the aegis of Esan central youth force, on Saturday defied the heavy rain and took to the streets of Irrua, headquarters of Esan Central Local Government Area, to demand for peaceful election.

The News Agency of Nigeria (NAN), reports that the protesters, bore placards with various inscriptions such as “we don’t want violence”, “we want peace”.

They took their protest to the palace of Onojie of Irrua, His Royal Highness (HRH) Alhaji Williams Momodu II, Irrua police division as well as the Area Command in Irrua.

The Spokesman for the protesters, Mr Eigbe Osazele, told newsmen that the area  in the state had been enjoying peaceful times in previous elections and that the Sept. 19, polls should not be different.

According to him, the recent attacks on the All Progressives Congress (APC), Chairman in the local government, Mr Michael Anakaso, and the Council’s Boss, Prof. Waziri Edokpa, is condemnable.

He requested the security agencies to fish out the perpetrators of the attacks.

“I want all the security agencies to wake up to the challenge and make sure that those involved in the brazen acts are brought to book within the next 48 hours.

“We don’t want to resort to self defence when we still have the security agencies whose primary responsibility is to protect lives and property.

“We are sending this message to the Inspector-General of police, Mr Mohammed Adamu, and the Director of the State Service to rise up to their responsibilities.

“We are peaceful and law abiding citizens,” he said.

Addressing the protesters at his palace, the Onojie of Irrua thanked them for being law abiding and conducting their protest in a peaceful manner.

“Don’t take to violence, don’t allow people to confuse you, vote for the person you know will give you quality leadership.

“Don’t allow people to buy your conscience with money.

“As you can see we don’t have water and road in this community, it’s only this election period we see them, and they will be busy later.

“Those that are promoting violence should bring their children,” said the traditional ruler.

Also speaking, the Divisional Police Officer in Irrua, Okoro Henry, assured the protesters that the police would ensure the protection of lives and propert before, during and after the election.

Okoro called on all citizens to go about their lawful business, adding that the police have the capacity to provide security for them. (NAN)