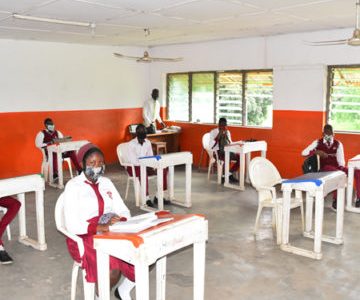 Some education stakeholders in Lagos have lauded the state government on planned reopening of schools in an effort to gradually ease the lockdown caused by the COVID-19 pandemic.

The stakeholders made the commendation in interviews with the News Agency of Nigeria (NAN) in Lagos on Sunday.

The state Gov. Babajide Sanwo-Olu had on Saturday announced that tertiary institutions in the state would reopen from Sept. 14, while primary and secondary schools might resume from Sept. 21.

He said that private school owners were set for resumption.

“Since final year students of secondary schools resumed to prepare for WASSCE, inspectors from the state ministry of education have been going round schools, and none of our members was found wanting.

“Reopening schools is long-awaited. Schools were closed for the past five months, and many of our members were unable to pay salary.

“Those that were able paid their staff between 25 per cent and 50 per cent on monthly basis,” he said.

“Private schools associations in Lagos State and the ministry of education have been working together to ensure safety of children because they are the future of tomorrow.

“For our association, we inaugurated NAPPS Quality Assurance Committee to go round and inspect our members’ schools; the committee submitted its report two weeks ago.

“Those found below average were cautioned and necessary checklist given to them,” he said.

Amusa said that requirements for schools ahead of the resumption, such as infrared thermometer, sanitiser and
wash-hand basins, were given to the members at a low cost.

According to him, teachers and students are tired of staying at home.

Adesina, however, said that some students engaged in meaningful activities such as learning entrepreneurial skills.

“With the latest development, hopefully tertiary institutions can finish first semester in December 2020 so that they can start a new semester next year.

“I am disturbed concerning primary and secondary schools because most of them did not finish or write second term examination.

“I do not know how they will conclude second and third terms this year without it affecting the scheme of work,” he said.

Adesina said that governments would need to restructure and refurbish public schools in order to comply with the World Health Organisation’s guidelines on the prevention of the COVID-19 pandemic.

“Both the federal and state governments need to start showing more concern on public schools because a lot of them lack tables, chairs, classrooms and so on,” he said.

Mr Simeon Fowowe, National President, Association of Nursery and Primary Education Instructors in Nigeria (ANPEIN), said that reopening of schools in Lagos was a welcome development.

Fowowe said that education stakeholders such as parents , teachers caregivers, associations and heads of institutions were ready for the resumption.

“By the records available, the number of COVID-19 infections has decreased, which means all hands must be on deck to prevent its further spread.

“We must stick to the prescribed precautionary measures in all schools.

“For our association, we have sufficiently equipped our members for the task ahead,” he said.

Fowowe said that the association trained its members on how to cope with emergencies and on precautionary measures before, during and after teaching.

“We appreciate Lagos State Government and its ministry of education for blazing the trail in this regard.

“The ministry under Mrs Folashade Adefisayo as the Commissioner deserves a great deal of commendation for its initiative and promptness to tackle challenges facing schools in the Badagry Division,” he said.(NAN)