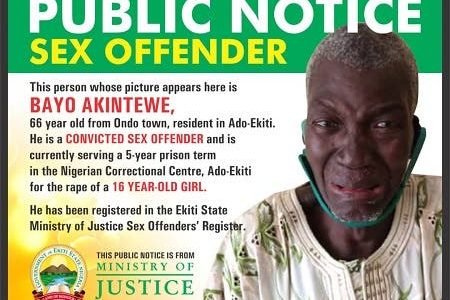 The Ekiti State Ministry Of Justice on Friday published the details of another convicted sex offender, a 66-year-old man, Bayo Akintewe who was convicted by a High Court sitting in Ado-Ekiti for the rape of a 16-year-old girl (identity withheld).

66 Year-old Akintawe who is of Ondo origin but was formerly a resident of Ado-Ekiti is currently serving a jail term of 5 years at the Nigeria Correctional Centre in Ado-Ekiti and has his name registered in the Ekiti State Ministry of Justice Sex Offenders’ Register.

The State government recently introduced additional stringent measures to deter sex offenders. In addition to naming and shaming, persons convicted of sex offences will not benefit from the Governor’s powers of the prerogative of mercy and will, therefore, serve the full term of their prison sentence.

Ekiti State is currently reviewing the sex offences provisions in its Criminal Code Law with a view to achieving the effective prosecution of sex offenders. Under the new proposals, the offence of rape will on conviction attract life imprisonment.

Ekiti State Government was the first state in Nigeria to open sex offenders register for the purpose of keeping records of convicted sex offenders in the State and this has however become a national policy in Nigeria.