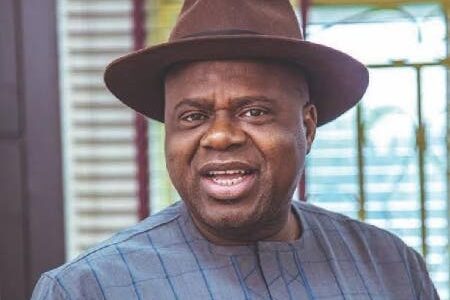 In line with Federal Government’s compliance to demands of #EndSARS protesters to free inmates that were unjustly jailed by police, the governor of Bayelsa State, Senator Douye Diri, has constituted a seven-member Advisory Committee on the prerogative of mercy.

Taking this decision during the state’s security council meeting in Government House, Yenagoa, the governor also directed the Commissioner for Health to take over the medical bills and treatment of the victims of shooting by police personnel in the Etegwe/Edepie axis of the state capital, Yenagoa.

This was disclosed by the Attorney-General and Commissioner for Justice, Mr Biriyai Dambo SAN, while briefing the media on the outcome of the third state security council meeting in Government House, Yenagoa.

It could be recalled that on Tuesday, some policemen in a patrol van reportedly inflicted injuries on four female traders when they fired shots to clear traffic in the area, which has a market.

It was reported that the victims were taken to the hospital where they are recuperating.

A statement by his Chief Press Secretary, Mr Daniel Alabrah, said this is in line with Federal Government’s directive to pardon convicts and decongest the prisons nationwide.

The statement further explained that the committee will be chaired by Mr Biriyai Dambo with other members to be named later.

The governor commended members of the security council for their proactiveness in averting chaos in the state during the #ENDSARS protests, which turned violent in some other states.

He said the synergy and good working relationship of heads of the security agencies and other arms of government as well as the peaceful disposition of the youths was responsible for the violence-free #EndSARS protest in the state.

“Let me use the opportunity to announce the constitution of the Advisory Committee on the Prerogative of Mercy. The body will be chaired by the Attorney General and Commissioner for Justice. The names of other members, statutory and otherwise, will be announced later.

“Let me also thank God, on behalf of the Bayelsa State Security Council, for keeping our state in peace till today. Our Holy Book tells us that the watchman watches in vain if the Lord does not watch over the city.

“Clearly in Bayelsa, God Almighty is helping all the security chiefs and the government. That can only be the explanation that even during the #EndSARS protest, Bayelsa was guided by God’s hands.

“Let me equally thank the youths for their understanding and for jealously guarding the few infrastructures in our state either built by the state government, the federal government or private individuals.

“By this singular act, you have told the world that you love your state and that you abhor violence or anything that will reduce and bring down your own state.

“The #ENDSARS protest did not find a violent space in Bayelsa. I appreciate you and pray that you keep this synergy between you, the Bayelsa government and the people of the state,” the governor said.

Mr Dambo explained that part of the functions of the Prerogative of Mercy Committee was to advise the governor on applications seeking amnesty for convicts.

“The governor is at liberty to exercise his constitutional powers to act based on the advice sought.

“As you are aware, the Federal Government in light of the Covid-19 pandemic has put a lot of programmes in place at ensuring decongestion of Nigeria correctional centres nationwide.”

He disclosed that heads of the various security agencies at the meeting pledged to ensure the conduct of a violence-free by-election for the Bayelsa Central and West senatorial districts on December 5.