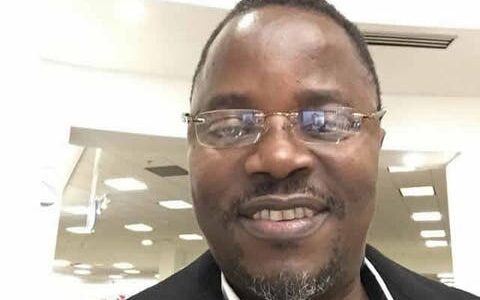 When #EndSARS protesters upended one of the czars of Nigeria’s 36 states, Babajide Sanwo-Olu, in Lagos and he fled in surrender to Aso Rock last week, the President, Major General Muhammadu Buhari (retd.), burst into laughter.

Buhari’s laughter wasn’t hearty. It was dry and mirthless, whizzing like a horsewhip on bare skin in harmattan. The laughter echoes the snapping of the windpipe when the tiger buries its yellow fangs in the back of the antelope’s neck, eyes glazed.

To many, Buhari’s laughter, sardonically, betrays the ultimate insincerity of Aso Rock about solving Nigeria’s problems. To some others, the unsaid words behind the laughter was, “See how dis small boy governor dey shake like leaf because of common protest. Kai, he don see fire!” In truth, I agree that Sanwo-Olu is a small boy in comparison to General Buhari.

Agitated, small boy Sanwo-Olu, who has been sacked since about two weeks ago from the Governor’s Office, Alausa, by youths protesting non-stop police killings, brutality and extortion nationwide, was seen in a viral video eagerly explaining to Buhari what Lagos State had done about the requests of the youth protesters.

Wearing a face mask and clenching a big brown envelope containing the demands of the protesters, Sanwo-Olu gesticulated and physically presented his envelope to Buhari, who has formed a habit of receiving guests without wearing a face mask, unguardedly sending a signal to the citizenry that foolhardy defiance is a protection against the coronavirus.

Talking with the haste of a pilot whose plane is in distress, Sanwo-Olu told Buhari, “They (protesters) said we should release all the protesters, we’ve released them; they said we should set up a trust fund to pay compensation to the families of the ones that have died, I’ve set up my own trust fund. Today, I’ve announced it.”

If Sanwo-Olu was shocked about the graceless laughter, he never showed it. He continued, “The third one, they said that we should set up some inquiry for the persons that are bitter…(Buhari interrupts, saying: “Yeah, I said that. I said that in response.”)

Sanwo-Olu continued, “So, tomorrow, the IGP is coming to the Governors’ Forum, he’s going to ask each of us to set up a four-man or five-man team. And the final one is, they said we should increase the salary of the police. The IGP said he was working on that. And (the) IGP said he’s going to be working to take some of them through some psychosocial treatments. Some, they’re going to go to the Force hospitals, they’re going to clean them up and check them. The ones that can still be absorbed, they will. So, everything is working but I just want to present this formally. (He hands over the envelope to Buhari). Thank you, sir.”

For mocking, instead of mourning those who have died, many Nigerians have called the President uncharitable names. But as annoying as the President’s inappropriate laughter was, I sincerely plead for forgiveness on his behalf. I plead for forgiveness for Buhari because I know that the sweat of the dog is masked by its fur just as our President’s sweat is masked by the splendour of Aso Rock.

As desirable as laughter is, it’s open to ambiguity, I need say. A laughter can be joyous or sorrowful or empty. If I were Buhari, my line of defence against wailers would be that my laughter during Sanwo-Olu’s presentation was sorrowful. I would remind them of the Yoruba proverb, “Oro buruku tohun terin,” which says misfortune walks side by side with laughter.

To those who seek to know whether the President would have laughed if any of his children was killed while protesting for a better Nigeria, I will say: Major General Buhari’s children are obedient, hard working ladies and gentlemen, too busy to lazy about on highways smoking, eating, drinking and singing. And why would Buhari’s children march on the streets to seek a better country when there’s nothing wrong in the Nigeria that fuels the presidential jets that keep them in the air and the limousines that convey them on land?

Buhari’s sweat or laughter, if you like, is seen by many protesting Nigerians as the gerontocratic trait of a leader in need of urgent retirement away from the rigours of critical thinking and the energy-sapping demands of nation-building. A majority of the protesting youths believes that in thought, word and deed, Buhari has no purpose in governance because he’s not in tandem with modern-day democratic realities.

This is why Major General Buhari deserves our collective empathy because he’s at the end of his tether. I’m sure Buhari is shocked and can’t understand why for the first time in the nation’s history, hitherto docile Nigerian youths have suddenly found their voice and massively risen to confront their oppressors. I can hear Buhari asking, who’s funding these protesting youths? I can imagine the loss on his face when a security report shows that the youths’ call for real change is fuelled by the misrule of his government. I can see worry on the President’s face when told that the youth agitation is being powered on the social media. I can hear, ‘social media kwo? Is social media contesting in 2023?’

Buhari deserves pity because he can’t do more than laugh as the events of the past two weeks are totally beyond him. This is why it took earth-shaking nationwide protests for Buhari to know that Nigerians are being slaughtered by the members of a police force long overdue for reformation.

Or, doesn’t Buhari together with his ministers, legislators in shallow chambers, principalities residing in Government Houses nationwide, the Inspector General of Police, secretaries to federal and state governments etc know that the police are killing, raping, maiming and extorting innocent Nigerians before these protests? They all kept quiet because they don’t represent the people. They only represent their pockets.

While Buhari and Nigeria’s past generation of leaders shout, “Off the mic,” the fresh blood out on the streets of Lagos, Kaduna, Abuja, Kano, Port Harcourt, Enugu, Osogbo, Ibadan, Owerri, shout, “Soro soke!” a synonym for, “Speak louder!” While Buhari, Goodluck Jonathan, Olusegun Obasanjo and their failed political leaderships are enmeshed in innumerable corruption allegations, the young generation of youths protesting on the streets demand openness, probity and equity.

Today, every Nigerian political office holder is afraid. They know the scales are falling off. Nigerian youths have torn the ‘lazy’ tag pinned on them by Buhari. They’ve also defied the notion that only money can mobilise the citizenry. For 60 years, the old order has failed the nation. A new order is rising. May it birth safely.

If the millions of jobs created by Obasanjo, Yar’Adua, Jonathan, Buhari administrations are true, no youth will be out on the streets today. If the thousands of hectares of farmlands they yearly vote billions of naira to cultivate are real, hungry youths won’t troop out to the streets for food at the protest grounds. If there was electricity in homes, some of the protesters would sit back at home to watch TV. If Buhari gave hope, the youths would cope.

Nigerians have perpetually listened to the broken record titled, “Nigeria’s unity is not negotiable.” Today, I laugh to see these funny leaders running helter-skelter, negotiating the country’s peace. Well, Buhari should know that being out of power for 21 years can’t kill the lust for power in Nigeria’s military. Half a word is enough for the wise.

In captivity, when a tiger or lion tastes human blood, it’s killed instantly because the big cats will kill more people after tasting human blood, for human blood is tastier than other animals’ blood because of its saltiness.

Nigerian youths have tasted the power to change the ills of their society. I pray they never remain the same again.