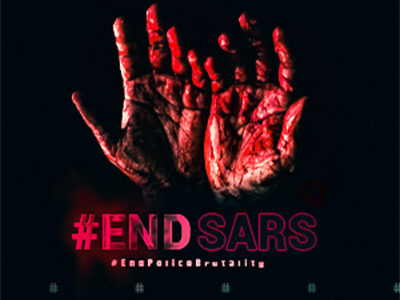 Widow of the slain  officer of the defunct Special Anti-Robbery Squad (SARS), Mrs Yetunde Ajayi told the Ekiti State Judicial Panel on Human Rights Violations by Police Officers (SARS) that her late husband was killed two hours after he left his family for official duty.

Her late husband Sgt Musiliu Ajayi was killed at Atikonkon in Ado Ekiti on Jan. 2, 2019.The mother of four who is a petty trader pleaded for sponsorship of her children in school as her breadwinner, her husband was no more.

Mrs Ajayi who was suing on behalf her late husband under cross examination said the death of her husband who served at the defunct special anti robbery squad of the Nigeria Police early last year remained a mystery to her.

Mrs Ajayi confirmed to the panel that the marks she saw on the corpse of her husband revealed that he was gruesomely murdered by unknown persons.

When asked if she reported the incident to the police authority, she said she was not in a stable condition to report as at when the incident happened.

Meanwhile Chairman of the Panel, Justice Corneliius Akintayo,said that all parties should submit it’s pettitions on or before 30th day of Nov. 2020 because the panel sitting has an expiration date.

Earlier, A former SARS official, Sgt. Oladele Ayodeji who said he is now transfered and serving at the Rapid Response Squad RRS Ekiti during his witness before the panel of how his colleague a former SARS official was murdered at Atikonkon in Ado Ekiti on Jan. 2, 2019.

Sgt. Ayodeji on Tuesday appeared before the Ekiti state Judicial Panel of Inquiry into allegations of police brutality, as witness for the pettitions filled by the wife of a Late Sgt. Ajaiyi Musileu a SARS officer.

He also narrated that he and his colleagues got a call that Musileu was knocked down by a bike around 7.30 am while on duty, they mobilized but on getting to the scene found him in his pool of blood breathing unconsciously and his motorcycle on the other side of the road.

He was rushed to Police Cottage Hospital Okesha Ado Ekiti, but unfortunately it he gave up the ghost few minutes to 9.00am.

“From our investigations and during our fact findings as to what actually caused his death because we discovered that he was bleeding at  the back of his neck.

“It was also recounted that there was a car driving behinde them while the incident happened but to their surprise the car stopped and two men came out of the car and they both picked up the two men on the other bike into the car and one of the men in the car drove off with their motorcycle.

“But one Gbenga Aluko was alleged to be the perpetrator of the crime, and he was arrested on the Jan. 29, 2019 by a team of SARS  operatives having being also alleged to be among the killers of cult members in the State.

“Aluko in his statement during interrogation and confessional statement while in police custody said he was not the perpetrator of the crime, but called one Ojo Ayodele aka Ojiaka as the perpetrator.

0 comments on “#EndSARS: My Husband Was Killed Two Hours After He Left Home- Widow Of Slain Ekiti SARS Officer”