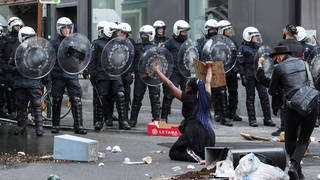 Follow RT onA lengthy resolution by the European Union legislators denounced US President Donald Trump for wanting to use force against rioters and condemned the “appalling death of George Floyd” and arrests of journalists.

In a 11-page resolution adopted on Friday with 493 votes in favor to 104 opposed – and 67 abstentions – the EU Parliament affirmed that “Black Lives Matter” and listed 36 more conclusions. The preamble ran out of letters of the alphabet.

Condemning the “appalling death of George Floyd” – a Minneapolis, Minnesota man who died during a botched arrest in late May – the EU parliamentarians also denounced “all forms of racism, hate and violence”as well as “Afrophobic traditions, such as the black face practice.”

They called on the US to “take decisive steps to address the structural racism and inequalities in the country, as reflected in police brutality” and condemned the “police crackdowns on peaceful US protesters and journalists.”