EU urges Britain to repair ties as it plans to sue London over N. Ireland and accuses Johnson of hogging vaccines 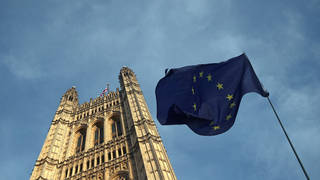 The EU’s ambassador to London has called on the British government to stop trying to “score points” against Brussels and seek to repair ties following the UK’s exit from the 27-nation economic bloc.

Speaking on Thursday, Joao Vale de Almeida, the EU ambassador to the UK, appealed for a truce between London and Brussels as relations continue to sour.

“I think we need to make an effort to change the mindset and give up on trying to score points on disputes of the past and focus ourselves on doing what we can do in making the most out of the agreements that we made,” the ambassador told reporters.

“We need to have high levels of trust, mutual trust,” he added.

Relations between the world’s sixth largest economy and the European bloc have taken a further tumble over the last seven days. On Wednesday, London summoned an EU diplomat to the foreign office to “correct” a comment by European Council President Charles Michel that left Prime Minister Boris Johnson smarting. Michel claimed the UK has an “outright” ban on vaccine exports, an accusation which Johnson has vehemently rejected.

Meanwhile, last Thursday, Maros Sefcovic, the European Commission vice president, said the EU would be launching imminent legal action against the UK following London’s decision to unilaterally delay the implementation of the Brexit deal which relates to Northern Ireland.

Ties have already been strained this year amid challenges implementing the Brexit agreement and rows over vaccine supplies. In February, London slammed the EU after the bloc briefly elected to trigger Article 16, which would have seen a land border created on the island of Ireland to prevent Covid-19 vaccines from leaving the EU.

0 comments on “EU urges Britain to repair ties as it plans to sue London over N. Ireland and accuses Johnson of hogging vaccines”