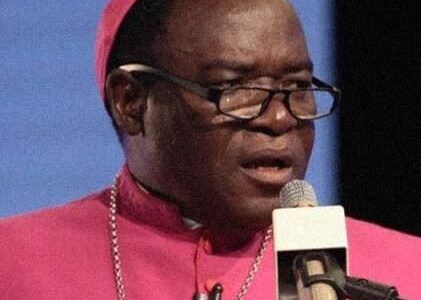 How the President Muhammadu Buhari-led federal government is making a fuss over the obvious truth told by the Bishop of Catholic Diocese of Sokoto, Most Rev. Matthew Hassan Kukah, in his Christmas message, is bemusing, writes Shola Oyeyipo

President Muhammadu Buhari and his supporters in the corridor of power are always in a state of paranoia, when any reputable person or group attempts to chastise the administration over its numerous failures and obvious inability to stay true to their electoral promises.

Despite the obvious failures of the All Progressives Congress (APC) leadership, the list of people the government media crew has attacked, when speaking truth to power is daily growing, but the person currently making headlines is the Bishop of Catholic Diocese of Sokoto, Most Rev. Matthew Hassan Kukah.

The clergy, in his Christmas homily titled: “A Nation in Search of Vindication” and with nine punchy subheadings, called out the Buhari-led federal government for its actions and inactions that are having grave consequences on Nigeria and Nigerians. As usual, some agents of the government were quick to lash out at him, and even alleging that he was propagating the idea of coup.

Minister of Information and Culture, Alhaji Lai Mohammed and the Chairman, Buhari Media Organisation (BMO), Niyi Akinsiju, both led the onslaught this time around. While Mohammed contended that Kukah’s speech was aimed at stoking the embers of hatred, sectarian strife and national disunity and also, an attempt to bring about a change of government without election, Akinsiju’s position was that the Bishop used the pulpit to sow division, discord and fuel an agenda of anarchy.

The real source of concern is not that the pro-Buhari elements came out to defend the administration that has superintended over a nation, where people are killed in droves and the killers walk free; that is what they are paid to do, but the issue is, juxtaposing Kukah’s criticisms with government’s reaction, it will not be wrong to conclude that Nigerians are in a hopeless situation, because this government seems insensitive to its failures.

The real issues identified by the preacher bordered on nepotism, northern or should one say Fulani agenda, the perplexing level of untamed terrorism, banditry and kidnapping. Perhaps the part that got the government tensed was where he said: “There is no way any non-Northern Muslim president could have done a fraction of what President Buhari has done by his nepotism and gotten away with it.”

Basically, everything the Man of God said in his message was true and they were definitely not designed to instigate the citizenry against the leadership. He just spoke the minds of a lot of Nigerians, including northerners, who are direct victims of the large-scale insecurity. It is left for the government to make amend or continue the way things are.
Kukah said: “This Christmas is again coming against a backdrop of so much pain, sorrow and uncertainty in our land. We all seem to have become sedated and inured to pain. Tragedy has been standing as our gatekeeper. For over ten years now, at almost each Christmas, a dark pall of horror, sorrow and death has consistently hung in our horizon threatening to eclipse the promises of the joy of Christmas.”

No rocket science is required to understand what the preacher elucidated in the above paragraph. In past years, there have been attacks on places of worship particularly, around Christmas period. So, he bemoaned the endless woes.
“Ours has become a nation wrapped in desolation. The prospects of a failed state stare us in the face: endless bloodletting, a collapsing economy, social anomie, domestic and community violence, kidnappings, armed robberies etc. Ours has become a house of horror with fear stalking our homes, highways, cities, hamlets and entire communities.

“The middle grounds of optimism have continued to shift and many genuinely ask, what have we done to the gods? Does Nigeria have a future? Where can we find hope? Like the Psalmist, we ask; from where shall come our help?” he lamented just as many Nigerians are lamenting in the corners of their rooms not knowing who next will be the victim of their hopeless circumstances.

Though the fans of the government got the adrenaline over his comment that, “Every honest Nigerian knows that there is no way any non-Northern Muslim president could have done a fraction of what President Buhari has done by his nepotism and gotten away with it,” because “There would have been a military coup a long time ago or we would have been at war,” every right-thinking Nigerian also knew he was correct on this. Very many Nigerians have decried the nepotism seen under the Buhari administration and one will wonder where it is strange to be called out for it.
“The president may have concluded that Christians will do nothing and will live with these actions. He may be right and we Christians cannot feel sorry that we have no pool of violence to draw from or threaten our country. However, God does not sleep. We can see from the inexplicable dilemma of his North.”

This statement did not instigate violence. Instead, it shows that there is inequality in the country. This inequality will only be addressed by another well-meaning administration, obviously not this present leadership.
Even if the government feigns ignorance, many people absolutely agree with Kukah’s position that the citizens “are hungry, angry, thirsty and starving,” that “the roads to the graveyards are busier than those to the farms,” that ours is a “derelict nation which is still unable or unwilling to protect its citizens,” and that “our country drifts almost rudderless, we seem like people travelling without maps, without destination and with neither Captain nor Crew. Citizens have nowhere to turn to.”
His reference to the incident at Chibok, Dapchi and recently Kankara, where bandits abducted some children before they were rescued are not fictitious! These are realities that have confronted Nigerians as a people and shaped global narratives about the state of affairs in the most populous black nation on earth.

Though very critical, he was actually kind to the government at some point by noting that there have been “grey areas of hope, flickers of light, achievement and so on,” and urging the people to cling tenaciously to these flickers of hope and not despair.
Either the ruling party or the government and their supporters like it or not, issues raised by Kukah cannot be swept under the carpet. They are salient and could haunt the country years to come.

Hence, his position that “This government owes the nation an explanation as to where it is headed as we seem to journey into darkness,” is appropriate.
Considering the Kukah-FG situation, one can only but pity Lai Mohammed, with the odious responsibility of defending a government that has since lost its goodwill among the people. Therefore, his rhetoric such as Kukah’s message was capable of stoking the embers of hatred and disunity or triggering unintended consequences were only designed to diffuse the facts contained in such admonition.

“While religious leaders have a responsibility to speak truth to power, such truth must not come wrapped in anger, hatred, disunity and religious disharmony,” Mohammed stated, but forgot that many religious leaders were not only feeling the pang of bad leadership but also the pains of government’s poor choices characterised by widespread insecurity, poverty and deaths.
Kukah did not call for a violent overthrow of government as the minister made it look, rather, he pointed out that Nigerians and people around the world were not happy about the state of affairs in the country.

“The United Nations has wailed. The Pope has wailed. Cardinals, Archbishops, Bishops, Priests, Pastors have wailed. Emirs have wailed. Politicians have wailed. The Sultan has wailed”, Kukah said, borrowing Femi Adesina’s description of Buhari’s critics.
Interestingly, these wailings will not stop, and the lamentations will continue until a government that feels the pain of Nigerians comes to power.