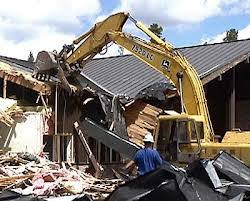 The News Agency of Nigeria (NAN) reports that FCTA officials who were accompanied by a combined team of security operatives stormed the area and pulled down the structure attached to the site of the collapsed uncompleted building.

NAN correspondent who was at the scene of the demolition, observed that the owner of the store was allowed to evacuate wares before the building was reduced to rubbles.

No casualties were reported in the process.

He said the department received a distress calls from residents of the area that the developer had gone back to site, and also selling items within the building.

” If we don’t do anything very promptly, another disaster will occur.

“It would have been unfortunate on our part. We are being proactive to avert any of such unfortunate incident that might occur,” Galadima said.

The director said that developer and operators of the store were duly notified about the demolition before the enforcement of today.

He also said that the department adhere to due process by conducting integrity test on the building, which the result of the test indicated that the structure failed the test .

“As a result of that, in order to forestall any future reoccurrence , we had to move in and remove the standing structure,” he said. (NAN)