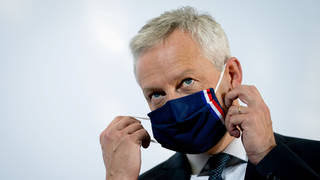 France’s Finance Minister Bruno Le Maire has tested positive for the coronavirus and is isolating at home. Meanwhile, France recorded its worst day for new cases of Covid-19 since the pandemic began.

Le Maire announced his diagnosis via Twitter on Friday, noting that he has no symptoms of the virus, but saying he will still “stay in solitary confinement for 7 days,” per government regulations.

Meanwhile, 13,215 cases of Covid-19 have been reported in France since Thursday, setting a new daily record. The previous record was set only a day earlier, when 10,593 cases were reported. Health officials also reported the deaths of 154 coronavirus patients since Thursday, bringing the country’s toll to date to 31,249.

France is one of several European countries experiencing a resurgence in coronavirus cases. Across the continent, more than 300,000 cases were recorded last week, World Health Organization Regional Director Hans Kluge said at a press conference on Thursday, adding that the spike in infections “should serve as a wake-up call for all of us.”

In France, the rise may possibly be attributed to a dramatic increase in testing. Health officials there tested a record number of people in the last week of August, with the government aiming to further ramp-up its efforts until a million people per week are tested.

When the coronavirus first swept Europe this spring, France was among the hardest-hit nations, and it imposed one of the continent’s most draconian lockdowns in response. Earlier this month, Health Minister Olivier Veran ruled out another nationwide lockdown, but individual regions and cities have implemented their own restrictions to curb the virus’ spread.