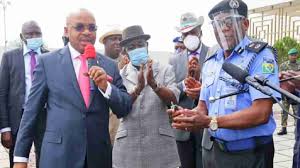 Gov. Udom Emmanuel of Akwa Ibom on Thursday donated 30 patrol vans to security agencies in the state to support the fight against crime.
The Commissioner for Information and Strategy, Mr Ini Ememobong, stated this in a statement in Uyo.
Ememobong stated that the vehicles were the first batch of the 100 vehicles to be delivered to security agencies in the state to enhance their mobility.
He stated that the governor made the donation during the state security council meeting attended by all the service chiefs in Akwa Ibom.
He further stated that the governor had also approved the reactivation of a Joint Task Force.
Ememobong stated that the vehicles were received on behalf of the service chiefs by the Commissioner of Police, Andrew Amiengheme.
He stated that Amiengheme, in his response, assured the residents of maximum protection before, during and after the Yuletide.
He urged the people to call the police emergency numbers in the event of any security breach and avoid sensationalism in the social media.