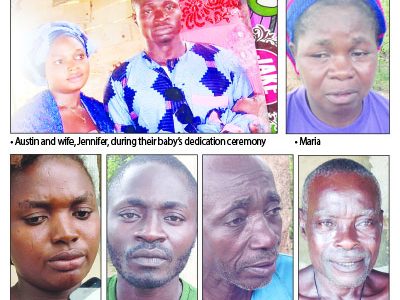 Albert Camp, a farming settlement in a hilly suburb of Asaba, Delta State, was relatively unknown until last month when gunmen suspected to be Fulani herdsmen violated its quiet ambience.

In the wee hours of the tragic day, the gunmen rained bullets on the houses, jolting residents from sleep. Tey fled from their mostly thatched-roof houses and scampered for safety in the bush.

When the dust settled, a 28-year-old father of two, Austin Nwaeke, was in a pool of blood at the entrance of a small apartment built in a corner of plot measuring 50 by 100.

Nwaeke had reclined on the veranda, unaware of impending danger, to take some fresh air, because the heat was intense within the house. His wife, Jennifer, and two kids endured the heat inside and slept.

But Jennifer, 25, was rudely woken up by gunshots at about 2.56am. Realising that her husband was still outside, she rushed out only to discover that he had been shot by the four men menacingly toting AK-47 rifles.

She retreated and took her children into in the kitchen to find refuge. From their hiding place, she heard another volley of gunfire, and thereafter could not hear her husband’s voice but that of the mauraders, who were shouting, “They killed our cow, we have come for revenge.”

When she summoned the courage to step outside and call for help, Nwaeke was gasping for breathe. He was rushed to the GRA Police Station, where they obtained a note referring the victim to the Federal Medical Centre (FMC), Asaba, for treatment but he died on the way.

At the moment, Jennifer, a fashion designer whose business has packed up for her inability to renew the rent for her shop, is distraught. She told our correspondent that feeding has become a major issue at the home front.

“We were planning to go to our village in Ebonyi State when this thing happened. My children now cry every time that they want to meet their daddy. I cannot feed anymore. Government should come to my aid because I am too young to be a widow,” she lamented.

She said the police visited the family once after the incident, but the security operatives should do everything possible to fish out the killers of her husband.

Perhaps, Nwaeke would have survived the shooting but for the lack of accessible road out of the camp to the main town. It took time to meander through the rocks and deep gullies along the road to the police station and the victim lost a lot of blood in the process.

Albert Camp, founded by Pa Albert Chukwuke, a native of Anambra State, in 1970, is largely populated by migrant farmers and artisans, particularly from the South-East.

Located far in the hilly suburbs, the camp lacks basic amenities and necessities of life. There is no road, water, electricity, school nor hospital. The source of domestic water is the Anwai stream, a tributary of River Niger.

In the midst of this lack, politicians still find a way of accessing it to ask for votes during election campaigns, after which they never come back.

Apart from the lack of basic amenities, the camp is vulnerable to security challenges apparently for its location in the far flung terrain, away from the prying eyes of security agents and apparatus mostly domiciled in the urban centre.

But Pa Chukwuke told this reporter that the incident of April 9 was the first time security was being breached in the agrarian setting, where the inhabitants mostly cultivate yam, cocoyam, maize and cassava, besides rearing domestic animals.

“This is the first time they are killing somebody in this camp since I opened it in 1970. The shooting that night was too much. I was afraid.

People ran from their houses but I could not run because of my legs.

“That boy (Austin) could have survived but there is no hospital here. No road, no school, our children go to Asaba for basic and secondary education. We go to Anwai for water. We don’t have electricity, that is why we are appealing to government to come to our aid.

“Now, everybody has run away from the camp because those bad boys promised to come back for more attacks. Some of them you are seeing now will run away in the evening and come back in the morning because of fear, nobody wants to die.

“We are begging government to provide us with security before they come and wipe out the entire camp. We are now doing vigilante but the weapons of those bad boys will overwhelm us if they come back,” Chukwuke said.

Mother of the deceased, Mrs. Maria Nwaeke, fought back tears while narrating what transpired, saying she had lunch with Austin at her apartment before the attack, and added that her son was never into crime.

“They just called me and when I came, I could not wake him up. He was my second son out of 10 children, and we ate together in my house before he came home the day before. I have suffered for him and now is the time for him to give to me, they came and took him away.

“They scaled the fence from the other side, shot him while he was sleeping out here, then opened the gate to get away, shouting that ‘they killed our cow’. Nothing concerned my son with the cow because where they killed it is very far from here,” she said.

On his part, 30-year-old elder brother of the deceased, Chukwudi Joshua Nwaeke, said Austin prepared the dinner that they had together at about 8pm before he (Joshua) left for his own apartment.

“When I heard the sound of gun that night, I came here and what was going on was something else. We took him to GRA police station, from there to FMC, where he was confirmed dead.

“Onyebuchi (Austin) was my blood brother; he was a generator mechanic and was never into crime. He hated intimidation and oppression irrespective of the social status of the oppressor,” Joshua said.

Also, Austin’s 70-year-old father, Romanus Nwaeke, said he was astonished by the attack, saying that he had lived in the camp for 30 years without any record of crime.

The septuagenarian blamed the police for not responding to their distress calls on time, noting that the security agents only came a day later when the dust had settled: “We reported to the police but they did not come immediately, they came after the media carried it, and it was too late because the herdsmen had escaped. The police just came and walked round, and up till now, we have not heard from them.”

Residents of the area called for security presence, saying, since the incident, herdsmen still come around with their cattle to graze during the day unhindered, and expressed fears of further attacks at nights.

One of the residents who had since abandoned her house, Mrs. Juliet, said the guns sounded as if the hoodlums were in her fenced compound, adding that some bullets pierced her window and fell on the lobby.

“I am extremely scared to go back to my house because they promised to come back. They even shot at my neighbour’s car that night. We were so scared that we had to switched off our phones at the place we were hiding inside the house,” she said.

On what should be done to avoid further attacks, Juliet urged government to create access roads “so that when we call for help, it will be convenient for security operatives to come and rescue us.”

“Also, there should be electricity to illuminate the area. If you are using power generating set and when it goes off at night, there is 100 percent chance that everyone is sleeping so they can come and operate.

“For now, nobody is here unless government provides security to assure the people of their safety. We are scared of being killed while being locked down as a result of COVID-19 concerns,” she said.

Public relations officer of Delta State Police Command, DSP Onome Onovwakpoyeya, who confirmed the incident, said investigation has already begun to unravel the cause of the killing and bring the culprits to book.