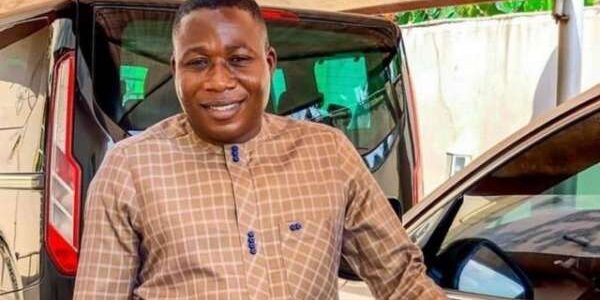 One of the media aides to Igboho, Dapo Salami, who confirmed the incident, said the hoodlums came with two jerry cans filled with Premium Motor Spirit (PMS) that they would have used to burn down the house, but for the Igboho’s ‘boys’ who challenged them.

He said: “They came exactly at 1.30am and resisted. I cannot confirm the number of those who came. We are not suspecting anyone, but we know that some people came, and they were resisted, that is just it.”

But it could not be ascertained as at the time of filing this report whether Igboho was in the house during the invasion or not. A source said Igboho was not around when the incident occurred, while another source said he was around.

However, a visit by Daily Sun to the Igboho’s residence, yesterday, revealed that the community in Soka area was calm and residents went about their normal business activities with ease. A cursory look at the palatial residence showed that there was no evidence of destruction on the building.

But two expended cartridges were seen at the extreme right in front of the house. One cell was seen in the gutter, while the second one was on the ground, outside the perimeter fence of the residence. One of the expended cartridges was neat and the other one was dirty. However, some residents of the area, who preferred anonymity, said they did not hear gunshots, until they heard the people in Igboho’s house shouting ‘Oooleeee’ (thief). They said sporadic gunshots followed the shouting bout.

One of the residents of the community further said six gunmen actually came to Igboho’s house and some of them wore military camouflage, while the rest wore black jeans and black tops.

Meanwhile, the spokesperson of Igboho, Olayomi Koiki, in a video clip posted on the social media, accused the Federal Government and Oyo State government of having hands in the situation, saying: “By tomorrow morning, I am sure the government would come with false press statements, that it was a set of unknown soldiers, and that was the same tactic they used to attack Fela’s mother. They equally used it during the #EndSARS.

0 comments on “How gunmen invaded Igboho’s house in Ibadan”