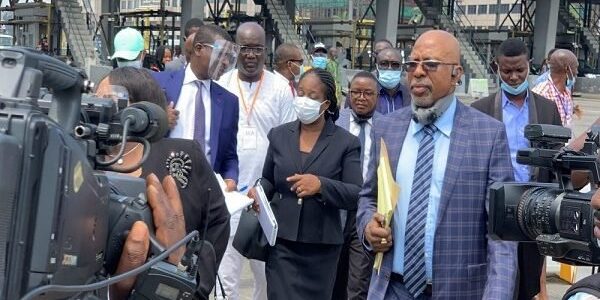 The Lagos State Judicial Panel of Enquiry and Restitution for Victims of SARS related abuses and other matters has heard how a businessman, Basil Chetal Ejiagwa, was tortured in 2014 till he lost the use of his legs and suffered brain damage.

Ejiagwa, who partially lost his memory, succumbed to brain tumour last Tuesday (November 17) while receiving care in his village in Imo State.

His cousin, Vincent Chukwu, who testified on Ejiagwa’s behalf, appealed to the panel for help to recover the N40 million damages awarded against the police by the Federal High Court in Lagos.

Chukwu said Ejiagwa was a trader at the Alaba International Market and was arrested in May 2014 by police officers from the Igando Police Station.

“He spent five days at the Igando Police Station and while he was there, they used a hammer to break his legs.

“He was then transferred to the Special Anti-Robbery Squad (SARS) in Ikeja. While there, they broke his head by hitting it several times with the butt of a gun.

“He spent nine-days at SARS and was released on May 31, 2019. At this time, he could not walk anymore and could not remember certain things.

“He couldn’t even remember that he had placed an order for the importation of some goods,” he said.

Chukwu said his cousin, who lived at 23 Jazz Avenue, New Iba, was initially taken to El-Shaddai Hospital in Igando but was rejected and referred to the Igando General Hospital.

“From the result of the hospital, they said the use of gun butt on his head made him lose his memory.”

“At the time, he had injuries all over his head; the brain tumour did not start immediately,” he said.

Chukwu said his cousin initially could not physically function properly but had become slightly better.

In 2017, Ejiagwa filed a case against SARS at the Federal High Court Lagos.

On April 16, 2019, N40million damages were awarded by the court against SARS in Ejiagwa’s favour.

Chukwu however noted that before the judgment was delivered, his cousin’s health worsened and he was diagnosed with a brain tumour.

He said the family has also been unable to receive the N40million damages awarded by the court from the police.

“I appeal to the panel to help the family recover what the judgment had given to us.

“When the tumour became bad, he was taken out of Lagos to the East for treatment because when you look at him, you will see a different person.

“He however died exactly a week ago on November 17,” he said.

The counsel to the petitioner, Mr Olalekan Ghazali tendered a copy of the Federal High Court judgment and hospital receipts worth N1million to the panel as exhibits.

Ghazali told the court that Ejiagwa had sustained several fractures which eventually developed into a brain tumour.

Reacting, the lead counsel for the police, Mr. Joseph Eboseremem questioned Gazali’s allegations about the circumstances of Ejiagwa’s demise.

“My lord, note the way my learned friend is cooking up allegations saying he died because of torture.

“We have not been served with the petition if they have the petition, they should serve us,” he said

The chairman of the panel, Justice Doris Okuwobi noted that it was not Gazali’s position to categorically state the petitioner’s cause of death because the panel was on a fact-finding mission.

The case was adjourned until December 4 for cross-examination.

0 comments on “‘How SARS damaged trader’s brain, broke his legs’”