How SARS operatives shattered my left leg, by hairdresser 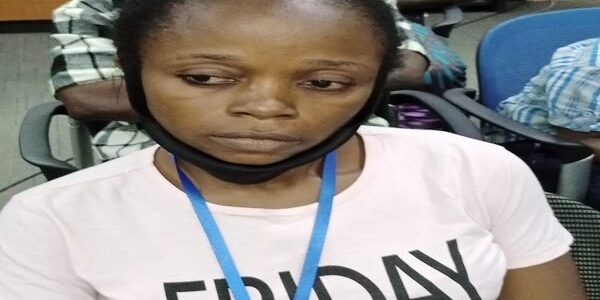 A 35-year-old hairdresser, Mrs Hannah Olugnodi, on Saturday narrated before the Lagos Judicial Panel and Restitution on SARS abuses how her left leg was shattered by a stray bullet fired by officers of the disbanded Special Anti-Robbery Squad (SARS) two years ago.

Olugbodi, a mother of two, told the Justice Doris Okuwobi led panel that she depends on a crutch to walk.

She said the incident happened in June 2018 when men of the SARS were attempting to arrest a young man with tattoos on his body suspected to be a ‘Yahoo Boy’ in  Ijeshatedo area of Lagos.

According to Mrs Olugbodi, the men of the SARS had arrived one Ogun City Hotel, Ijeshatedo to demand money to fuel their vehicle.

In the process, she said they saw a young man with tattoo on his body among some young men watching a football match at the hotel.

The petitioner said the owner of the hotel, one Abu, who usually gave men of the SARS money for fuel, was not around when they arrived.

She said that as they made to leave, they saw the young man with tattoos and labelled him a Yahoo Yahoo boy.

She said an attempt by the SARS operatives to arrest and take the boy with tattoos away was resisted by the other boys who insisted the accused was not a yahoo boy.

She said this made the SARS operatives to start firing shots to scare the boys in the area away.

Olugbodi said she was at Ijeshatedo market trying to buy pepper to prepare food for her children to take to school the following day when she was hit by a stray bullet.

She said the market women rushed towards her and asked her for her address and the name of her husband, which she managed to give before passing out.

She said she was eventually taken to the Lagos University Teaching Hospital where they said there was no bed space and she was given four bags of intravenous fluid right inside a bus.

“The bullet hit me in the left leg and affected my bone. It left a hole in the bone in my leg left me traumatised.

“The doctor said they needed to do four surgeries on  my leg. She said first surgery has been performed which left her walking with the aid of a crutch because one leg is now longer than the other and her legs are no longer balanced.

“The second surgery would involve cutting my bone because the bone did not survive and has a hole in it from where the bullet entered,” she said.

Olugbodi said she spent six months in LUTH and the doctor told her she needed to return two years later for a follow-up surgery.

“I can’t walk properly; I feel pain every five minutes. When I sat there,  I felt the air conditioner inside my bone, I had to go out for a while.

“I can’t walk properly; I stagger now because I am not balanced. In the midnight, I can’t sleep. I can’t do my work. Since two years, I have been at home, doing nothing. I am totally dependent on my husband.

“The panel should compensate me and my two kids. It is only my husband that is doing everything,” Olugbodi said.

The petitioner’s husband, Oluwaseun Olugbodi, corroborated his story before the panel.

Under cross examination by Police counsel,  Joseph Ebosereme,  he insisted that the SARS operatives came from Gbagada.

He said the Divisional Police Officer in the area called other police stations in the area and told him that the stray bullet was fired by SARS operatives from Gbagada.

Justice Okuwobi adjourned the case till December 8 for further hearing.

0 comments on “How SARS operatives shattered my left leg, by hairdresser”