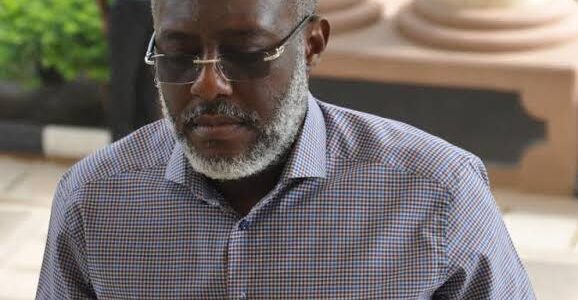 Former national publicity secretary of the Peoples Democratic Party (PDP) Chief Olisa Metuh has warned that he would no longer be used as a guinea pig for political persecution.

He further added that attempts to persuade or arm-arm-twist him into abandoning his political affiliation in order to stop what he called obvious persecution.

The former PDP spokesman stated this while reacting to publications which he said where sponsored by the Economic and Financial Crimes Commission (EFCC) in a renewed media trial in my case, this time aimed at Blackmailing and influencing the Supreme Court on the matter.

Metuh lamented that said such media trial and agenda setting by the EFCC compromised the processes at the High Court and led to a judgment that has been found to be overtly bias.

He further added that attempts to persuade or arm-arm-twist him into abandoning his political affiliation in order to stop what he called obvious persecution.

“I therefore wish to state, without any equivocation, that I will no longer allow a government agency created to chase criminals to continue to use me as a guinea pig for political persecution, particularly as we are now before the Supreme Court.

“I am aware that this attempt to blackmail and arm-twist the Supreme Court is being engineered by certain elements in the EFCC, who often whisper that they are acting on pressures from above. These same people had claimed that they were being threatened by the former Acting Chairman of the EFCC, Ibrahim Magu to use all means to silence me.

“The prosecution Counsel, Mr. Sylvanus Tahir from Gombe state, had boasted in open court on several occasions, but particularly on the last day of my cross-examination, that I will be sent to jail and no appeal can overturn the judgment.

“A cursory look at the judgment of the court of first instance reveals importation of lies earlier peddled by the EFCC upon my arrest and outside of the courtroom and which were never presented as evidence in the course of trial. It is quite revealing that such lies found themselves as content of the judgment. Does it mean that the EFCC was part of writing the judgment read by the court?

“Since the quashing of the judgment of the trial court by the Court of Appeal, agents of the EFCC have been harassing and threatening me.

“Now that the matter has been filed before the Supreme Court, these same EFCC agents have started going around boasting about the composition of the panel, the judgment it will deliver and even giving the date it will be delivered.

“It is instructive to state that the EFCC has filed their appeal and the two respondents have also cross-appealed. Why are thesame agents desperate to influence and intimidate the judiciary by dishing out half-truths in the media, if not that they are afraid their appeal has no merit.

“While it is my decision to focus on my family, my career, my fragile health and my dwindled and destroyed businesses, I shall no longer continue to keep quiet in the face of such brazen media trial.”

He charged the EFCC to get ready to argue their appeal at the Supreme Court and not on the pages of newspapers, which is a direct affront to the courts.

“As a free citizen of Nigeria, I reserve the rights to remain in any political party of my choice and to actively participate in the political discourse of my country. Let nobody try to persuade, advise or arm-twist me to change my political affiliation inorder to stop my obvious persecution as NO MAN IS GOD.

“I restate that I know my rights and I will no longer allow an obvious persecution, on political grounds, to be camouflaged as an anti-corruption war,” he said.