Ijaw leader to Biafra, Oduduwa Republic agitators: Leave us out of your campaigns 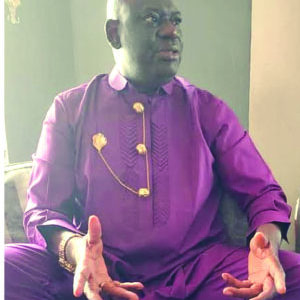 The President of the Ijaw National Congress (INC), the umbrella body of Ijaw nation, Prof Benjamin Okaba has spoken on what the delegation of Ijaw leaders told President Buhari during the group’s recent meeting with the president. He also warned separatists’ movement clamouring for Biafra and Oduduwa Republic to leave the Ijaws out of such agitations. He spoke with FEMI FOLARANMI

What are the issues you have been dealing with since you became president?

The INC has the mandate to advocate for, defend and propagate the Ijaw agenda and the Ijaw cause. The Ijaw cause is all about self-determination. The Ijaw agenda is about freedom of Ijaw people from all shackles of oppression, exploitation and marginalisation we have suffered over the decades even from pre-colonial times.

We have started first and foremost to place this at the front burner. So we had a press conference recently where we copiously stated the level of misery and balkanization, exploitation and the extent to which the Nigerian state has been unfair to us. We have also spoken about the resource injustice and why the necessity to go back to the original derivation principle that made it possible for owners of resources to manage and control whatever resources as God-given and pay appropriate tax. This was the principle in place according to the laws of this country as far back as 1946.  So by the constitution of 1957, 1960 and 1963, recognition was accorded to derivation as a major principle of resource distribution. To that extent, cocoa that was predominantly found in the West, groundnut in the North and palm oil in the East enjoyed all of this.

Yes oil was struck in commercial quantities as back as 1958 and since then this derivation principle was jettisoned, particularly after the civil war when General Gowon came with the three Rs and said he needed enough money and took derivation to almost zero. And today we have a paltry 13 per cent.

Restructuring means, let us repair this structure, let us go back to the original mandate of 1960. Let us go back to the understanding that brought us together as a union that respects individuality and diversity that gives everybody the room to flow as a nation as a united nation, a united Nigeria, just like the United States of America. This was the dream of our forefathers. So this current structure is anathema to building a united Nigeria. That structure should be replaced by a new constitution by the people, for the people and of the people, that the interest of every Nigerian would be taken care of, give every Nigerian a sense of belonging and all Nigerians would see Nigeria as their own and no other country.

Were some of these issues discussed during your meeting with President Buhari and what was your impression on his views about the issues raised?

The important thing about that visit was that, for the first time in several years, the Ijaw people placed officially before the President the cries, woes and concerns of our people. It has all been advocacy, it has all been crying, and it has all been shouting but as an executive that believes in meaningful engagement we took these things down to Mr President and we told him that one, we have made enormous contributions to this country. For instance, the entire export terminal in this country where crude oil leaves Nigeria are all situated in Ijaw land and none of them happens to be accessible by road. The communities where these facilities are situated are suffering. There is darkness, there is poverty, there are no hospitals and they are neglected. We talked about this same issue of restructuring as the only answer and in fact, I referred to it as the magical wand that can turn things around for good in this country. We talked about resource control, saying that for justice to prevail we must revert to what the majority ethnic groups enjoyed in the past.

The president responded to these requests in a manner that I would say does not satisfactorily touch on the issues. Taking the issue one after the other, when he said the issue of restructuring would be referred to the National assembly, he has not taken a position. As a president he should take a position whether he believes in restructuring or not. Number two, in the same manner, the All Progressive Congress led administration set up a committee led by Governor El- Rufai on restructuring. The National Executive Committee of APC adopted that report. There is also the 2014 national conference report that also adopted restructuring. Mr President should develop enough courage; let him bow to the will of the people. If his own party said restructuring is the answer to Nigeria’s multifarious problems, if the 2014 national conference report also said so, why is Mr President dilly-dallying?

On the issue of the NDDC board, forensic audit is a normal administrative exercise; it does not stop the inauguration of the board. And we also used the opportunity to remind Mr President and Senator Godswill Akpabio that there was an agreement reached on behalf of the people with the Federal Government that before the end of June, the board would be inaugurated. People are watching. I want to believe that the government for the issue of integrity would stand by its statement. We are still insisting that forensic audit can never be an excuse for postponing the inauguration of the board. The NDDC has been suspending so much more for the past six years without a substantive board. It is almost some individuals running the show. It is a way of further under developing the region.

In one of your first comments after your election, you declared that Ijaw nation would not allow itself to be conquered. What is your take on Biafra and Oduduwa Republic, including Ijaw territories in their maps?

Some people have wondered why the Ijaw people want restructuring now, yet did not make such calls when an Ijaw man, Dr Goodluck Jonathan was President?

That is not true. Ijaws have been clamouring for restructuring even under Jonathan. The style and strategy might differ but it has always been. In fact during the 2014 national conference, Ijaws made a case for restructuring. I was the secretary of the committee that drafted the report. We have always clamoured for restructuring. Those saying that should go to the records. We made representations to even fiscal commission and also on state creation where we had a document on 10 federating units.

The political elite of Niger Delta have also being fingered in the injustice meted out to the Ijaw nation.

In every society, we have Judas everywhere. There a

Credit: Daily Sunre some persons who benefit by patronising the Federal Government. The good thing about is that they constitute an infinitesimal portion. We have so many elites who believe in the sustainability of our struggle.

0 comments on “Ijaw leader to Biafra, Oduduwa Republic agitators: Leave us out of your campaigns”