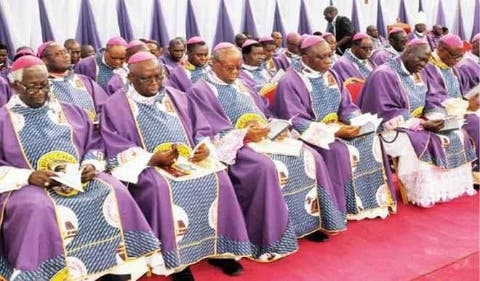 Catholic Bishops have asked Nigerians to rise and defend themselves against attacks by bandits, herdsmen, kidnappers and other violent criminals across the country.

The bishops spoke as North-East governors yesterday, for the second time in four days, told President Muhammadu Buhari that there was the need to address the root causes of Boko Haram insurgency in the zone.

This came as the Special Task Force, Operation Safe Haven, OPSH, maintaining peace in Plateau and parts of Southern Kaduna and Bauchi states, has arrested eight suspects in connection with recent killings in Southern Kaduna.

This is even as gunmen shot a man, kidnapped a girl in Katsina State on Sunday night, while bandits killed a school proprietor who was on his way to Taraba from Abuja same Sunday. He was killed a few kilometres to Taraba State.

Rising from the second plenary meeting of Owerri Ecclesiastical Province at Bishop’s House, Okigwe, the Catholic Bishops in a communique issued at the end of the meeting, expressed concern over growing insecurity in the country and asked Nigerians to be vigilant and be ready to defend themselves.

In the communiqué, signed by the Chairman and Secretary, Archbishop Anthony J.V. Obinna and Most Rev. Augustine T. Ukwuoma, respectively, the Bishops said: “Bearing in mind that no economic or educational endeavour can thrive in a volatile and unsafe environment, the security and safety of the nation at large and Igboland in particular, deserve special attention.

“Kidnapping, banditry, armed robbery, incessant killings, which have continued unabated, cast serious doubts on the willingness and capability of our security outfits to rise up to their constitutional responsibilities.

“Rise up in prayer to God in vigilance and in legitimate self-defence, for the right to life, to our homes and to our lands that is God-given.”

The bishops also called on governors, as chief security officers of their states, to protect their people’s lives, homes and their lands, appealing specially to Imo and Abia state governors to protect their domains against marauding herdsmen, kidnappers and other violent criminals terrorizing the people.

On COVID-19, the Bishops noted that nothing had shaken the world to its foundations as coronavirus, saying “amid the unprecedented panic, tension and confusion provoked by the COVID-19 pandemic, and in the face of the resurgent insecurity in our land and across the nation, we have every reason to thank God, who has kept us alive by His mercy.”

Reaffirming that COVID-19 is real, the Bishops stressed the need for governments at all levels to rise to their responsibility of ensuring adequate provisions of basic amenities, such as running water.

“Particular attention should be paid to improving our poor healthcare facilities, making provision for more testing centres with affordable services and enough personal protective equipment for our healthcare workers,’’ the Bishops pleaded.

On the effect of the pandemic on education, the Bishop’s said: “The pandemic has also impacted negatively on our educational system. Our schools at all levels have been closed for months. With everybody at home, there has been an increase in domestic violence, abuses and all sorts of crimes.

“The inadequacy of our educational system and formation have been laid bare. Some climes have tried to bridge the gap through online education. Unfortunately, we lack the basic infrastructure to cue in, except in a handful of places and schools.

“But this is too few, too selective and too expensive to provide for an integral human forum, which is the goal of education.

“This is a challenge for all stakeholders in education. The billions of Naira embezzled regularly could be gainfully used in meeting these challenges.”