Insecurity: Many questions on Buhari’s reluctance to replace security chiefs 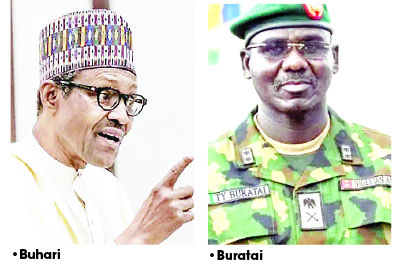 When President Muhammadu Buhari appointed new service chiefs and a National Security Adviser, Nigerians were expectant that the fight against terror which had gained momentum at the end of former President Goodluck Jonathan’s administration and yielded positive results will intensify. More than five years later however, terrorism, kidnapping and banditry have taken over many communities and this has led to public outcry against the security chiefs.

With the new security chiefs at the helm, some gains were made in the fight against terror. Residents in communities in states like Borno where the terrorists had hoisted flags were relieved when the areas were recaptured by the Nigerian troops. But as time went on, kidnapping and banditry began to spread. From the Kaduna-Abuja highway to Borno, Kaduna, Zamfara and  Katsina, the President’s hometown, kidnappers are having a field day, extorting money from hapless villagers and leaving a trail of blood in their path. From the kidnapping of over 300 boys in Kankara community in Katisna, to the slaughtering of 43 rice farmers in Borno, the tales of horror and bloodshed became a daily occurrence and Nigerians began asking questions as to why the President was reluctant to sack the Service Chiefs whom many accuse of being bereft of new ideas to tackle terrorism.

Timeline of some of the most recent killings

In December 23, terrorists abducted a traditional ruler and 15 others in fresh attack on Katsina community and in December 25, 2020 suspected Boko Haram members burnt down the Ekklesiyar Yan’uwaa Nigeria, also known as the Church of the Brethren in Nigeria in Pemi, a ward under Chibok Local Government Area of Borno State, killing six people.

Debiro, a town close to Biu Local Government was attacked by Boko Haram in May 2020 and the community’s primary school was destroyed. In November 2020, over 11 persons were killed when Boko Haram attacked Takulashe, a village in Chibok, Borno State.

Kidnappers along Lokoja-Abuja road abducted members of the National Youth Service Corps who were on their way to the orientation camp in Osun State on Tuesday, December 22. One of the corps members was shot dead.

As banditry, kidnapping and terrorism continued almost unabated, the Senate, on three occasions, asked President Buhari to immediately phase out the current Service Chiefs and replace them with new ones with fresh ideas and solutions. The most recent debate in the Senate was led by Kashim Shettima who presented a motion on the recent killings of 43 farmers in Zabarmari community in Jere Local Government Area of Borno State. He said the Nigerian military in conjunction with other security agencies have not been able to quell terrorism affecting the region in spite of the slogan by government officials that the terrorists have been technically defeated.

The governor of Borno State, Babagana Zulum, whose convoy had been attacked several times by Boko Haram listed out six key recommendations to the Federal Government – one of which is the recruitment of foreign mercenaries to help in ending the war against terror. Despite the outcry even from members of the ruling party, the President, though acknowledging that the Service Chiefs are not doing enough to tackle security, has given no indication that they would be replaced.

But what could be going on in the President’s mind and why has he refused to consider replacing those whose job it is to secure the nation? Daily Sun spoke to Umar Sani, a former spokesperson to the presidential candidate of the Peoples Democratic Party (PDP) in the 2019 election, Atiku Abubakar, and he says the service chiefs are waging a psychological warfare and are playing on Buhari’s fears of a repeat of the 1984 coup against him.

“I think the service chiefs are playing on the president’s psychology because most of what they usually say in public are actually directed at him. For instance, when Buratai was decorating the 39 new major generals, he said they should not plan any coup. That statement was directed at Buhari; he is telling the president that these officers have the capacity to plan a coup. At the Security Council meetings, only the service chiefs are usually present, the Vice President is also supposed to attend but I learned that he doesn’t even attend anymore. The security chiefs are the ones that would tell the President that this and this is what is happening and so the president would have no choice than to believe them. They are the ones that give him security reports. If something is reported in the news and he calls their attention to it, they can tell him that the media is lying against him and trying to paint him in a bad light and he will believe.

“Remember when he said he has learned from his past mistakes? He was referring to the time when he was head of state; it was the service chiefs that he ought to have left that he sacked which made it easy for junior officers to topple him in a coup. The service chiefs know what his fears are and they are playing on it. They know that he isn’t interested in leadership but the only thing he is interested in is to continue as president and nothing should tamper with his presidency. So, as far as nothing tampers with Buhari’s presidency, nothing would tamper with the service chiefs, which is what is really at play,” Sani said.

Personal relationships shouldn’t be at expense of national interest -Yakassai

Daily Sun asked northern elder, Tanko Yakassai if he is of the opinion that the President is afraid of being removed through a coup and if he believes that the president values loyalty over competence. Yakassai said if the president feels strongly about the Service Chiefs, he can make them ministers, advisors or even ambassadors but he should give the opportunity to other people with fresh ideas on how to tackle insecurity.

“I don’t know why the President is reluctant to sack the service chiefs. I said it before, even when their tenure had expired and he decided to retain them on contract basis, I said it is wrong because it would demoralize the junior officers.  The aspiration of any junior officer in an establishment like this where there is hierarchy, is to reach the top of his career. If for any reason, you insist on retaining people after they have reached that peak, you are demoralising the people below.

“The second point is that Buhari has spent over five years in government since he won the election when he appointed these people. If in five years, the security situation is not getting better but getting worse, it means that the people on top have tried their best but it is not good enough for the situation. It is only logical that you give others the opportunity to bring fresh ideas to the table.”

Does he value loyalty over competence at the expense of the nation’s security? Yakassai said, “There are people who are saying that the president is insisting on retaining them because he knows them. He is a military man and he knows how they changed governments, in fact, most of the coups were carried out by junior officers. I don’t know the service chiefs and I have only met one of them but personal relationship should not be at the expense of national interest. He is the president and he can make them ministers, advisors or even ambassadors if he doesn’t want to change them but he should give the opportunity to other people to try as well so we can see. New people would come in with new ideas, no doubt about it.

Former national chairman of the All Progressives Grand Alliance (APGA), Chekwas Okorie told Daily Sun that it is a wrong strategy to change your field commanders when you are at war because changing them won’t solve the problem of insecurity. He believes Buhari isn’t retaining them based on personal loyalty but on their loyalty to the constitution.

“The President has more information about those he appointed in those critical positions than anyone of us. He is a General and he has been Head of State before, so he also knows what loyalty means. The loyalty I am referring to here is not him as President Buhari but loyalty to the constitution of the Federal Republic of Nigeria. My thinking is that changing the service chiefs at the behest of his critics is not what will solve the security problem that we have. We are in a state of war, that is the truth and you don’t change your field commanders when you are at war except the person is working against the state or has committed a treasonable offence”, Okorie said.

The Bishop of the Catholic Diocese of Sokoto, Mathew Kukah in his Christmas message on Friday, December 25, said that there could have been a coup if a non-northern Muslim President does a fraction of what President Buhari did. He accused the president of institutionalising northern hegemony by ‘reducing others in public life to second-class status’. Alluding to the killings, he said, “This government owes the nation an explanation as to where it is headed as we seem to journey into darkness. The spilling of this blood must be related to a more sinister plot that is beyond our comprehension. Are we going to remain hogtied by these evil men or are they gradually becoming part of a larger plot to seal the fate of our country?

“President Buhari deliberately sacrificed the dreams of those who voted for him to what seemed like a programme to stratify and institutionalise northern hegemony. He has pursued this self defeating and alienating policy at the expense of greater national cohesion. Every honest Nigerian knows that there is no way any non-northern Muslim President could have done a fraction of what President Buhari has done by his nepotism and gotten away with it. There would have been military coup a long time ago or we would have been at war. The President may have concluded that Christians will do nothing and will live with these actions.

“He may be right and we Christians cannot feel sorry that we have no pool of violence to draw from or threaten our country. However, God does not sleep. We can see from the inexplicable dilemma of his north,” Kukah said.

0 comments on “Insecurity: Many questions on Buhari’s reluctance to replace security chiefs”