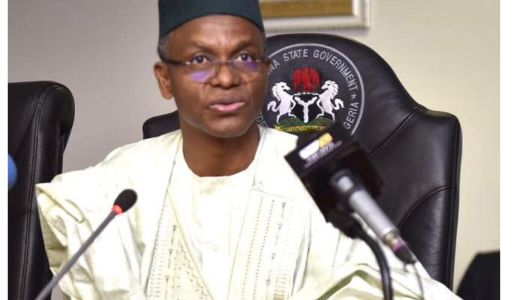 Governor Nasir el-Rufai of Kaduna State, on Tuesday, declared that his government will not surrender the state to criminal elements, saying experience has shown that paying ransom or negotiating with criminals only encourage them.

el-Rufai also noted that mass abduction was like a novelty in 2014 under former President Goodluck Jonathan administration, but the facts have now changed since then, as negotiations and ransom payments have not stopped the criminals.

In a statement issued by the special adviser on media and communication to the governor, Muyiwa Adekeye, he gave context  to a video clip where Governor el-Rufai was seen advocating for all options to ensure the release of the abducted Chibok girls in 2014.

The statement explained that, President Jonathan-led administration denied or doubted that the Chibok girls abduction happened, adding “That was the context under which civic pressures were brought on the government.’’

‘’Nigeria’s journey since the 2014 Chibok tragedy has proven that the solution to violent crimes, including terrorism and banditry, is a robust response from the state and its coercive agencies,” he said.

He added that paying of ransoms make  criminals  “to press ahead for a surrender of the public treasury to them. That is clearly not in the public interest.’’

The statement justified el-Rufai’s present position of not paying ransom or negotiating with bandits, arguing  that “it is only prudent to review one’s position when the facts change, and the suggestion made by a citizen years ago cannot be taken as the immutable answer to a serious problem which has evolved since 2014, no matter the viral replays of the said video clip.’’

“The quantum of money paid as ransom following many negotiations with bandits have not stopped kidnappings, reduced their frequency or deterred the criminals,’’ he noted.

The governor noted that the Kaduna State government has been consistently transparent about its security challenges, stressing that ‘”it has supported and continues to provide resources to the security agencies in the state.’’

The statement reiterated that Kaduna State has been “engaging the Federal Government to have security responses that move away from reactive response of repelling bandits towards a comprehensive, proactive offensive that takes the battle to the criminals and uproots them.’’

“As a sub-national, with no direct control of any of the security agencies, we cannot make this task more difficult by giving criminals the resources to acquire more arms,’’ he added.

The governor, therefore, regrets the recent kidnaps and killings of students from tertiary institutions in Kaduna  state, ‘”and we sympathise with their families with whom we share the aim of the safe return of all the  students.’’

“We mourn the dead students and we offer our condolences to the family and friends of the deceased,” he said, reminding that “the ruthless and heartless resort of the kidnappers to murdering these young persons is part of their effort to further their blackmail and compel us to abandon our ‘no-ransom, no-negotiation’ policy” the statement said.