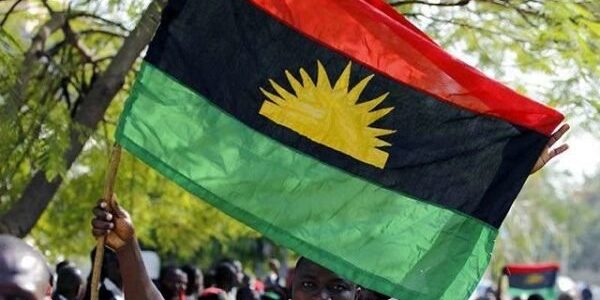 Ado local government area shares boundary with Ebonyi with residents of both communities always at war.

The flags were seen at strategic locations in the community, which hosts several indigenes of neighbouring Ebonyi.

The Nation learnt members of the community raised the alarm having woken up to discover the Biafra flags.

Former chairman of Ado Local Government, Hon. Otse Otokpa, who confirmed the incident, told newsmen it was the third time IPOB members were hoisting the flags in Ekele community.

He said the IPOB members have been threatening to annex part of Ado local government in Benue to the South East.

“This is about the third time it is happening. In 2014/2015, even that time apart from hoisting their flag they also wrote on logs of wood and on foot path ‘Biafra Territory’.

“There was also a time the people built a house around that place, (Ekele community) then, I informed the state security operatives that time and I was told that the IPOB used the house to scout for people and training for MASSOB men and DSS went and dislodged them.”

Otokpa said the council chairman had gone to the area with some soldiers to remove the flags.